NEW YORK, December 27, 2010 -- On Tuesday, February 8, at 12 noon a rally will be held for the support of legalized and regulated mixed martial arts in New York State*. We will gather at 250 Broadway, Manhattan, New York, 10007 (Across the street from City Hall).

This rally is being organized by the Coalition to Legalize Mixed Martial Arts in New York, a non-partisan volunteer group of organizations, gyms, business owners, and individuals who support the legalization and regulation of mixed martial arts in the state of New York.

We ask that you bring picket signs (please keep your comments and images respectful) and, if possible, a pair of focus mitts. Please DO NOT bring any audio projection equipment.

-Stephen Koepfer of the Coalition to Legalize Mixed Martial Arts in New York. 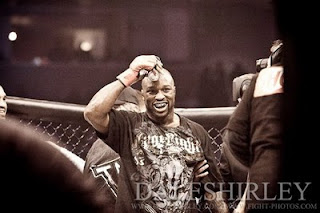 We open by finding out when King Mo plans to return to action in Strikeforce following surgery. He attended the K-1 World Grand Prix in Japan on December 11, and we discussed that historic event, which was won by Alistair Overeem. King Mo will also be attending the Sengoku Soul of Fight card on December 30, 2010, at the Ariake Colosseum in Tokyo, Japan, and the Dynamite!! 2010 card on December 31, 2010, at the Saitama Super Arena in Saitama, Japan, both of which will feature numerous fights under differing rules. We thus previewed these highly-anticipated cards.

In addition, we announced some of our top choices for the best athletes and events of 2010 in mixed martial arts, boxing, kickboxing, wrestling, and overall for the combat sports. We discussed why we expect 2011 to be a banner year in the combat sports for organizations like Strikeforce, Bellator, Martial Combat, and even for the K-1 World Grand Prix, as well as many others around the world. King Mo also explained why he believes that the mentality of K-1 fighters is different and preferable to that of many mixed martial arts fighters, and much more.