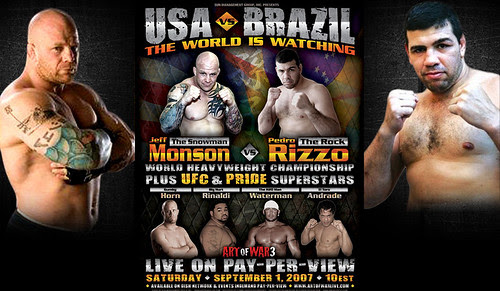 On this edition of NO HOLDS BARRED, host Eddie Goldman continues our preview of the Art of War 3 mixed martial arts show. This event will be held this Saturday, September 1, at the American Airlines Center in Dallas, Texas, and shown live on pay-per-view television.

We speak with former UFC heavyweight contender and current IFA heavyweight champion Pedro Rizzo, who defends his title against Jeff Monson in the main event at Art of War 3.

We also speak with CJ Comu, the chairman and CEO of SUN Sports & Entertainment Inc., the parent company of Art of War, about the business and media aspects of this event.

You can also listen to it through this blog and my MySpace page, also by pressing the play button on the player.

If you want to leave a comment on the show, you can do so on this blog.

IFL, the International Fight League, the world's first professional mixed martial arts league. Make sure to check out their regular TV shows on FSN (Fox Sports Net) in the U.S. and to check your local listings for dates and times. You can also catch IFL Battleground on MyNetworkTV. Check out the IFL web site, ifl.tv, for a listing of IFL live events and their TV schedule.

Gladiator Challenge, shaking up the mixed martial arts world since 1999, and now with 30 shows per year. For more news and info, check out their web site, GladiatorChallenge.com.

Gladiator Magazine, for in-depth coverage of Brazilian Jiu-Jitsu, submission grappling, and MMA, as well as lifestyle articles on surfing, cars, movies, and more. Gladiator Magazine is available at any major bookstore and online at BJJMart.com or Jiu Jitsu Pro Gear.

On this week's edition of SecondsOut Radio, host Eddie Goldman reviews the "Punchin' at the Paradise" fight card, which was held Friday, August 24, at the Utopia Paradise Theater in the Bronx, New York, and which was shown in the US on ESPN2's Friday Night Fights.

After his fight, we spoke with 27-year-old cruiserweight Alfredo Escalera Jr. (15-0-1, 11KOs), who survived a first round knockdown to take an eight-round decision over Harvey Jolly (6-5-1, 3 KOs). He is the son of the former world super featherweight champion Alfredo "Salsero" Escalera, who attended this fight.

The main event featured welterweight Delvin Rodriguez (now 20-2-1, 1 ND, with 12 KOs) in his first fight back after being stopped by Jesse Feliciano in March. His opponent was Keenan Collins (12-2-1, 1 ND, 8 KOs). Rodriguez's attempted comeback fight proved to be anti-climactic, as the bout was halted after the second round due to a cut over Collins's left eye. The referee ruled that the cut was caused by an accidental head butt. Since the fight had not gone at least four rounds, it was declared a no decision.

Video replays of the fight, however, seemed to indicate that the cut was caused by a right hand by Rodriguez, and showed no evidence of any head butt by Rodriguez. Controversy ensued, and Ron Scott Stevens, chairman of the New York State Athletic Commission, said he would review the video in the commission's offices this week.

We spoke with Ron Scott Stevens after the fight about this controversy, and what the commission does, and does not, have the power to do in such instances. We also asked him about the proposed sanctioning of mixed martial arts in New York.

As many people already know, the September 8 fight between Fernando Vargas and Ricardo Mayorga has been postponed after Vargas was found to be suffering from anemia. No new plans for this bout have yet been announced, although its promoters have said that they want to see it rescheduled.

The 29-year-old Vargas had already announced that this was to have been his last fight, and that he was now going to become a promoter. Before the announcement of this fight's postponement, we spoke with Fernando Vargas on a media teleconference call this past week to get an idea of what he plans to do after he retires as an active fighter.