“I Want It All” on TheSweetScience.com

My latest country song, er, column is up on TheSweetScience.com.

Called “I Want It All”, it explains more or less why on June 10 I will be covering the Miguel Cotto-Paulie Malignaggi card at Madison Square Garden rather than the Antonio Tarver-Bernard Hopkins card that same night in Atlantic City.

And you don’t even have to ask about my college reunion dinner that same weekend for a mere 150 Georges, and I don’t mean Foreman’s sons.

Ryan Bennett, veteran sports and mixed martial arts announcer, and the founder of the web site MMAWeekly, passed away Wednesday after being involved in a tragic auto accident. He was 35. More information is on MMAWeekly.

We send our condolences to his family and friends.

In the first part of our show, we speak wih controversial heavyweight fighter Wes Sims. He has a rematch with Daniel Gracie in a super fight on the International Fight League (IFL) show Saturday at the Trump Taj Mahal in Atlantic City, NJ.

We also speak with Joey “Knockdown” Brown, who takes on Vadim Kulchitskiy at the Mixed Fighting Championship 7 (MFC) show, also Saturday, and at Boardwalk Hall, also in Atlantic City, NJ.

In the second part of the show, we speak with veteran fight announcer and manager Jeff Weller, who is now a mixed martial arts promoter. His show, called Extreme Wars X2, takes place Saturday at the Oakland Arena in Oakland, California, and will be webcast on MMAHawaii.com. We also discuss the overall state of mixed martial arts.

Underhook, with Next Level Apparel, the tops in grappling shorts, rashguards, and more.

On this week’s packed edition of SecondsOut Radio, host Eddie Goldman discusses the present, the past, and the future of boxing.

We speak with the lightweight champion Diego Corrales (40-3, 33 KOs) and his nemesis, Jose Luis Castillo (54-7-1, 47 KOs), who had the 2005 Fight of the Year, have split their first two fights, and now will go at it for the third time on Sat., June 3, in Las Vegas and in a bout televised in the U.S. on Showtime. We also speak with undefeated flyweight titleholder Vic Darchinyan (25-0, 20 KOs), who defends his belt against fellow unbeaten fighter Luis Maldonado (33-0-1, 25 KOs) on that same show. Corrales, Castillo, and Darchinyan all help preview their bouts.

A new organization known as Superfighter is trying to play a major role in the future of boxing. They are planning a series of eight-man, one-day tournaments made up of four-round fights. The first of these is slated to take place in the fall in Australia, and in the heavyweight division. Plans for this group were unveiled at a New York media conference last week.

Superfighter CEO and founder Steven Duval of Australia also explained how he sees his brainchild going and what plans he has for his organization.

Another heavyweight announced as being part of this tournament but not at the media conference was former top heavyweight Shannon Briggs (47-4-1, 41 KOs). In a comeback effort, he has reeled off 11 straight wins by knockout or TKO, including a stoppage win at the end of the third round this past Wednesday in New York. At ringside right after his fight, we got Briggs’s comments both on that fight and his immediate future plans.

Another Cool Day at the Office 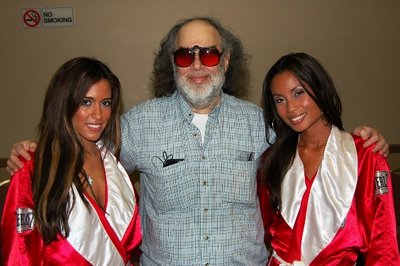 Left to right: Amber, me, and Christina at the Broadway Boxing show May 19, 2006, at the Manhattan Center in New York. Thanks to Richard Cox of RoundCardGirlz.com for the photo.

Pay$Per$View TV: Is the End Near?

Most likely because I hadn't been looking for such things, I didn't realize how inadvertently easy it would be to come across free – and illegal – online videos of Saturday's UFC pay$per$view. I was looking for results and comments on the show, which I did not order, on various message boards from people who had seen it.

If you want to know why I didn't order it, on Saturday my monthly cable bill from Time Warner arrived. It included the fifty bucks for the De La Hoya-Mayorga pay$per$view – reportedly seen in 875,000 households – and came to a mere $161.06. And it was accurate.

With sites like YouTube, RapidShare, and so many others, the pay$per$view wall is coming down, albeit illegally. Policing such sites is a monstrous task, and may be a virtual impossibility, so pay$per$view producers are going to have to rethink their business models, and fast, like it or not. But like the fiasco in the music business, they probably won’t be smart enough to do so until it is too late to limit the damage.