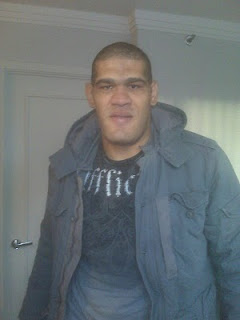 On this edition of No Holds Barred, host Eddie Goldman speaks with Strikeforce heavyweight fighter Antonio "Bigfoot" Silva, who will be facing Fedor Emelianenko on Saturday, February 12, at the IZOD Center in East Rutherford, New Jersey, in the opening round of the Strikeforce World Grand Prix Heavyweight Tournament. We spoke with him on January 10 when he was in New York as part of a photo and video shoot for Strikeforce and Showtime, which will be telecasting this tournament in the U.S.

We also review some of the history about the situation in New York when mixed martial arts was first legalized and then made illegal in 1997, and show why its banning was not done to ensure fighter safety.

There will be a rally on Tuesday, February 8, in New York City to support legalizing and regulating mixed martial arts in New York. More information can be found on the site of the sponsor of the rally, the Coalition to Legalize Mixed Martial Arts in New York.