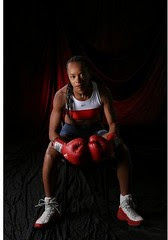 Our segment on the show can be heard here.

The "Joey Reynolds Show" is heard on over 80 radio stations. This talk show airs live beginning at midnight and runs to 5 AM ET, on WOR 710 AM in New York.

You can also listen to the "Joey Reynolds Show" online. For more information on the show's webcast, go to http://www.wor710.com/.

For more information on Myra Chanin, who works with the show, and also about Joey and the show, go to http://motherwonderful.com/.

Suszannah "Destiny" Warner, the NABF atomweight champion, and Eddie Goldman of No Holds Barred and SecondsOut Radio will be guests on the nationally-syndicated "Joey Reynolds Show" Tuesday night/Wednesday morning, September 4/5.

We plan to discuss Suszannah's career, boxing, and just about anything else which might cross our minds.

For more information on Myra Chanin, who works with the show, and also about Joey and the show, go to http://motherwonderful.com/.

On this edition of NO HOLDS BARRED, host Eddie Goldman begins with a Labor Day salute to the Culinary Workers Union Local 226.

This 60,000-member union, based in Las Vegas, has a "PLEASE DO NOT PATRONIZE LIST" of non-union hotels and casinos. That list includes several which are owned and operated by Station Casinos, whose two top officers are Frank J. Fertitta III and Lorenzo J. Fertitta, who also are the main moneymen behind UFC and Pride. The anti-union practices of Station Casinos were noted in a major news article.

Next, we speak with one of the hottest prospects recently to enter the world of mixed martial arts, Jake Rosholt. Jake was a three-time NCAA Div. 1 wrestling champion for the national champion Oklahoma State Cowboys. He is now 1-0 in mixed martial arts, and next fights Friday, Sept. 28, at the Masters of the Cage XVI event at the Bricktown Coca-Cola Event Center in Oklahoma City, Okla. An Internet pay-per-view is planned for that event.

To listen to NO HOLDS BARRED, click here or here and just press the play button on the player.

You can also listen to it through this blog and my MySpace page, also by pressing the play button on the player.

If you want to leave a comment on the show, you can do so on this blog.

IFL, the International Fight League, the world's first professional mixed martial arts league. Make sure to check out their regular TV shows on FSN (Fox Sports Net) in the U.S. and to check your local listings for dates and times. You can also catch IFL Battleground on MyNetworkTV. Check out the IFL web site, ifl.tv, for a listing of IFL live events and their TV schedule.

Gladiator Challenge, shaking up the mixed martial arts world since 1999, and now with 30 shows per year. For more news and info, check out their web site, GladiatorChallenge.com.

Gladiator Magazine, for in-depth coverage of Brazilian Jiu-Jitsu, submission grappling, and MMA, as well as lifestyle articles on surfing, cars, movies, and more. Gladiator Magazine is available at any major bookstore and online at BJJMart.com or Jiu Jitsu Pro Gear.

On this week's edition of SecondsOut Radio, host Eddie Goldman provides a glimpse at what should be a stellar, action-packed, and important final four months of 2007 for the sport of boxing.

While these fights will be covered more in-depth in the weeks and months to come, and interviews with many of these fighters will allow them to express their views, on this show we highlight the overall importance of this impressive lineup. But also discussed is why boxing's anarchistic structure will limit the ability of the sport, including its fighters and fans, to take full advantage of this upcoming pugilistic feast.