Why I Missed the WFA Pay-Per-View

I was all set to have the best of both worlds tonight. I have two legal cable boxes from Time Warner Cable in New York City, two TV's, and two VCR's. One was set up to watch and tape the World Fighting Alliance (WFA) pay-per-view, which I was, of course, planning to pay for. The other was set for HBO, with the live fight between welterweight champ Carlos Baldomir and Arturo Gatti, and the tape of last week's Shane Mosley-Fernando Vargas pay-per-view.

Then I tried to order the WFA pay-per-view.

I have a digital box, put on channel 301 which shows In Demand 1, pressed the blue "B" button for buy, but then got a message that the order was being processed.

There it sat for many minutes, so I called the local number for the cable bandits, 718-358-0900, which connects you to their call center in northern Ontario. Some rude woman told me that they cannot process any "MOD" orders, meaning movies on demand. I told her this was a live show on channel 301, and of course she seemed confused about their own system. But she insisted there was nothing she could do.

This is one time such nonsense is not a result of corporate shenanigans against a competitor. Almost the same thing happened with HBO pay-per-view's Mayweather-Judah fight in April, which could not be ordered here, and their De La Hoya-Mayorga fight in May, which I only succeeded in ordering by getting a rare intelligent and helpful customer service rep on the phone for several minutes. And I mentioned all this to Mark Taffet, head of HBO pay-per-view, which of course is also part of the Time Warner media monster, and he told me he had gotten numerous reports of similar problems all over Manhattan with Time Warner Cable.

It is also ridiculous for promoters to base their business plans on pay-per-view revenue from cable companies. Besides shutting out most fans, especially the younger ones, these videos usually end up rather quickly online somewhere.

Yes, these are pirated videos. But with the big pirates of the cable monopolies sticking you up for services and not delivering, I can no longer complain too loudly about the little pirates, who usually do not even profit from what they do.
The promoters should drop pay-per-view on cable and switch to Internet pay-per-view. They won't have to share most of the revenue with the cable sharks and can reach the entire world.

Anyway, the Mosley-Vargas 2 replay is almost done, so let me get back to the tube.

Update: Now MySpace is down! I shoulda gone to the bar.

Bernadette Robinson and Me 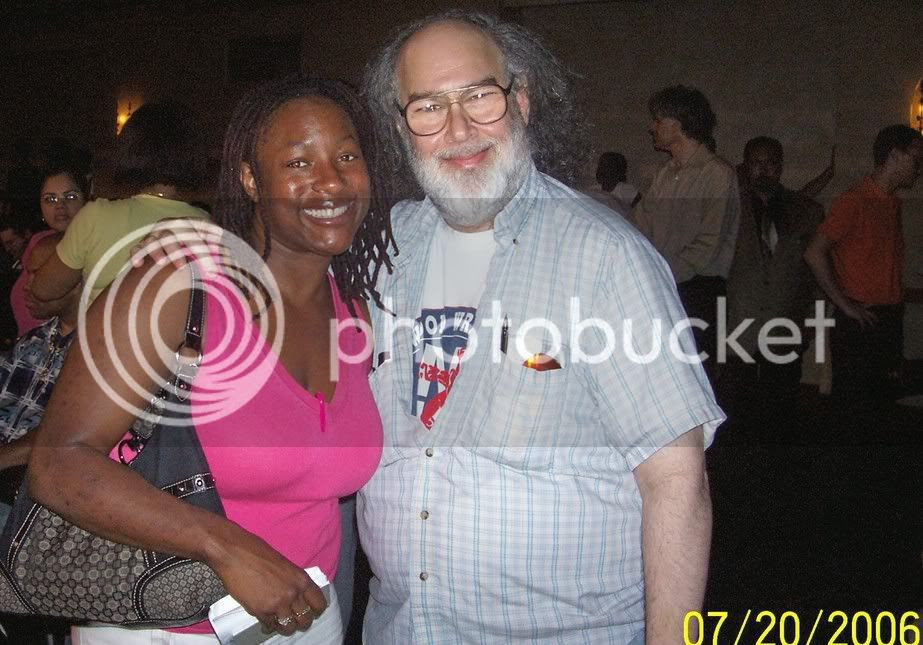 Bernadette Robinson, the Boxing Queen of Myspace, and me at Broadway Boxing, July 20, 2006. I assume you can tell who is who.

My latest article on FightNightNews.com is up, a review of Thursday night's Broadway Boxing card at New York's Manhattan Center. It is called "Broadway's Best Theater: Salita Wins After Midnight, Primera Stops Stevens", so check it out.

On this week's edition of NO HOLDS BARRED, host Eddie Goldman speaks with Bob Meyrowitz, former CEO of eYada.com and Semaphore Entertainment Group (SEG), which started and produced the original Ultimate Fighting Championship (UFC) shows from 1993 to 2000.

Bob offers his take on what he thinks of the current UFC product and the level of talent in it under its present owner, Zuffa. He also refutes the many factually incorrect articles that have appeared mainly in newspapers claiming that when SEG put on UFC shows, there were no rules, that the company ran from sanctioning by state athletic commissions, and that the level of athlete in the early UFC's was low. He recounts how UFC was sanctioned by the New York State Athletic Commission in late 1996, but how the commission double-crossed UFC at the last moment. He discusses UFC's attempt in 1999 to get sanctioned by the Nevada State Athletic Commission, and who on that commission opposed its sanctioning. Plus, he tells us who among the mainstream media and numerous boxing writers now commenting on UFC and its history have actually bothered to contact him to find out his views and what occurred.

Plus, Bob talks about his plans to run a new mixed martial arts event in the very near future, plans which have not been completely finalized yet but are expected to be so in a very short time. And he tells us what his attitude is towards the mixed martial arts and fight media, as well as other promoters, an issue which has again come to the fore.

The tables were turned for once, and in a good way, as I was just the subject of an audio interview Tuesday by Judyth Piazza, CEO and editor of The Student Operated Press. This site aims to give aspiring student writers the opportunity to have their work published.

The interview focused on what motivates me in my journalistic activities as well as my background and advice to young, aspiring journalists. As expected, my answers were No Holds Barred.

Plus, Ms. Piazza did a good, professional job in setting up and conducting this interview, as well as using the many tools of the Internet including her account at MySpace.com. I think we will be hearing a lot more from her in the world of journalism.

You can listen to this interview, and for free, at the Student Operated Press site here.

On this week's edition of SecondsOut Radio, host Eddie Goldman comments on this past Saturday's rematch between Shane Mosley, and Fernando Vargas in Las Vegas, and what it says about the value of the many boxing pay-per-view shows.