"I Agree With Dana White (Almost)" on ADCC News

My latest column is up on the ADCC News.

Referencing the always gracious, modest, amiable, and truthful president of the UFC, it is called "I Agree With Dana White (Almost)".

"The Dinosaurs Come Home to Roost" on BraggingRightsCorner.com

We are now in an era of the dominance of the so-called Web 2.0 services, meaning those with an emphasis on interactivity like the social networking site MySpace.com.

Most of boxing, however, is still in an era of ink-stained, cigarette-smoking, fedora-wearing drunks banging away on manual typewriters.

Guess where the younger fans are going?

There is, however, one major exception. That is the subject of my column "The Dinosaurs Come Home to Roost" which appears on BraggingRightsCorner.com.

A short while ago I received an e-mail from the folks at PodOmatic, which is the main audio host of the NO HOLDS BARRED podcast. It said that they now have made it possible to embed a podcast player on blogs, web pages, and MySpace profiles.

The bottom line is that you can now directly play the NO HOLDS BARRED podcast by clicking on the player at the top of this page on my No Holds Barred blog or by going to my profile on MySpace.com.

So pick your favorite one, subscribe through iTunes, enter your e-mail address in the box on the PodOmatic player, or just click on one of the links listed in my messages about each show.

If this gets any easier, all you will have to do is dream about it and the show will be beamed to you!

NO HOLDS BARRED: John Nix on Beach Wrestling in Oklahoma, Urban Youth, and the Combat Sports

On this week's edition of NO HOLDS BARRED, host Eddie Goldman speaks with former University of Oklahoma wrestler John Nix, who is helping run an event this weekend featuring the newest style of wrestling conducted under the auspices of USA Wrestling and FILA, the international wrestling federation.

That style is beach wrestling, and, to the surprise of some, it is starting to catch on with many veteran and novice wrestlers alike.

This event is the Oklahoma Southern Sand National Beach Wrestling Championship. It will be held this Sat., August 26, from 10 AM to 6 PM CDT, at 71st and Riverside in the Tulsa Riverside Parks at the beach volleyball court on the Arkansas River, all in Tulsa, Oklahoma.

Our guest, a longtime educator, also does much other essential work with young people, and especially those from the Black, poor, and working class communities in Tulsa. He is co-owner of the non-profit organization Molding Men, which, as he has written online, "formed in 2004 to promote the sport of wrestling and for the purpose of providing Tulsa, Oklahoma youth, with summer employment and educational experiences that build on their individual strengths and incorporate youth development principles." Molding Men also runs the Pin King Youth Wrestling Club, which is affiliated with USA Wrestling, and which trains over 30 young athletes mainly from the predominantly Black and poor North Side of Tulsa, Oklahoma.

This beach wrestling event as well as the rest of these most admirable activities are well-explained on several web pages.

The Oklahoma Beach Wrestling profile on MySpace is here.

Make sure to check out all these pages, bookmark them, and do whatever you can to assist these efforts. 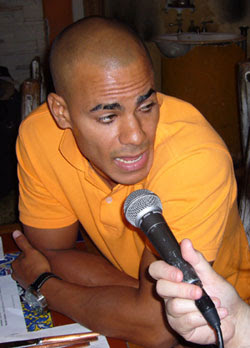 On MySpace, Edgar Santana is here, Dmitriy Salita is here, and DiBella Entertainment is here.