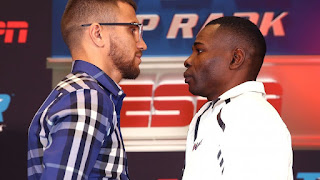 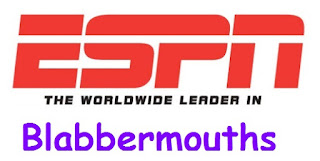 ESPN has put out a press release propagandizing that Saturday's fight between Vasyl Lomachenko and Guillermo Rigondeaux is "the biggest boxing match of the year". This is pretty funny, since it is being held in Madison Square Garden's Theater, which is not even the biggest room in that building, and in whose main arena Miguel Cotto dropped his retirement fight to Sadam Ali just last week.

And, of course, it ignores (and insults) what was really the biggest fight of the year, the April 29 heavyweight classic between Anthony Joshua and Wladimir Klitschko in front of 90,000 people in London's Wembley Stadium, which broke U.K. pay-per-view records, and was viewed by tens of millions of people around the world.

As for TV, being the biggest fight on U.S. TV this year (since for most American hacks and flacks only America is great for sports and matters) is a possibility, but will be difficult to achieve. So far that honor belongs to the fight between Keith Thurman and Danny Garcia on CBS March 4, which peaked at 5.1 million viewers and averaged 3.1 million viewers. So we shall know the ratings for Lomachenko vs. Rigondeaux sometime shortly after the show airs.

What is significant, behind all the cliches, hype, and rubbish, is that for this fight at least, ESPN is providing much support on its various networks and online. The press conference was shown on ESPN3, the weigh-ins will be televised on ESPN2, and Lomachenko, the Top Rank fighter being showcased ahead of Rigondeaux, was on SportsCenter. They also have several supporting preview articles, although expert analysis of this fight is far better in many non-ESPN places.

For some unannounced reason, Teddy Atlas will not be this fight's live blabbermouth. Those positions are being filled by Mark Kriegel and Stephen A. Smith, so expect the commentary to be best experienced with the volume muted.

For U.K. viewers, this fight is on BoxNation, which might provide more professional commentary and analysis.

My preview, "Will Vasyl Lomachenko vs. Guillermo Rigondeaux Be Arum's Revenge?" can be seen here.

The ESPN press release mentioned above can be seen here.

Will Vasyl Lomachenko vs. Guillermo Rigondeaux Be Arum's Revenge? 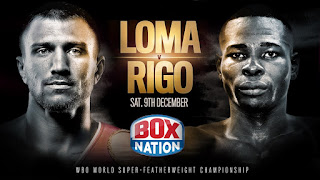 (Here is a very slightly edited transcript of the section of the latest edition of the No Holds Barred podcast on the upcoming fight between Vasyl Lomachenko and Guillermo Rigondeaux.)

This coming Saturday, December 9, in Madison Square Garden's small 5000-seat room known as the Theater, and televised in the U.S. on ESPN and in the U.K. on BoxNation, there will be another fight with great appeal to the true believers in boxing, but which also might require a miracle for the scores to be fair and reflect what goes on in the ring, should it, as most expect, go to the judges. That is the showdown between the two double Olympic gold medalists and among the best if not THE best technicians in boxing today, WBO 130-pound champion Vasyl Lomachenko and WBA 122-pound champion Guillermo Rigondeaux.

To get this fight, the older, shorter, and smaller Rigondeaux had to move up two weight classes and fight on a card promoted by Top Rank, the outfit that dumped and trashed him after he decisively outboxed and schooled the talented Nonito Donaire in 2013, whom Top Rank was pushing at the time.

Could this fight end in another fair decision? Will Santa Claus make an appearance in your chimney? Do people even use chimneys anymore? Will Arum and company let Rigondeaux win if he fails to knock out Lomachenko a couple of times? Our colleague Charles Farrell is writing a piece on this, so hopefully it will be posted soon, and make sure to read it when it is up.

Top Rank fled the declining HBO boxing program earlier this year for ESPN, meaning they now have expanded reach for their fights on TV on this regular cable network, and through its app, much more than through the premium network HBO. On Saturday, November 11, the Top Rank boxing show on ESPN in the U.S. got about twice as many viewers as the HBO card on that same night. ESPN's card featured Artur Beterbiev vs. Enrico Köelling for the IBF light heavyweight belt and Jose Ramirez vs. Mike Reed. HBO's card was headlined by Daniel Jacobs vs. Luis Arias. So Top Rank's strategy seems to be working so far, with more evidence coming this week as the Lomachenko-Rigondeaux card goes head-to-head with an HBO live show.

This one is a Golden Boy show, headlined by Miguel Roman facing Orlando Salido, who, not fighting by coincidence on the same day as Lomachenko, handed Lomachenko his only pro loss back in 2014 in Lomachenko's second pro fight. But that will likely not be enough to make this show competitive in the TV ratings department with Lomachenko-Rigondeaux on ESPN.

It is of course within reason that Lomachenko might legitimately defeat Rigondeaux. Lomachenko, though many fighters avoid him, has been more active than Rigondeaux, who has had various fights fall through. This will be Lomachenko's third fight this year, and second for Rigondeaux, but who only fought that one controversial round against Moises Flores in June in a fight which ended after Rigondeaux decked Flores just after the bell and he did not continue. Rigondeaux only fought once in 2016 and 2015, while Lomachenko fought twice in each of those years.

Size and age will matter as well, although Rigondeaux has shown no signs of slowing down in the ring. But he sometimes doesn't have the explosive, eye-catching style which judges usually favor. Lomachenko could be the more active fighter also. Both men are defensive wizards and accurate punchers, and also southpaws. Rigondeaux has underrated power, with the Flores fight and his breaking Jazza Dickens's jaw with one punch in his previous fight being examples. Rigondeaux will certainly need that power against Lomachenko, but unless he is able to connect squarely and visibly, all the factors working against him may result in a Lomachenko victory, disputed or not.

Either way, it appears the working script for this fight is entitled "Arum's Revenge". The unanimous decision for Rigondeaux against Donaire, also in New York, upset both Arum and many tools and fools in the Boxing Writers Association of America (lol). Will they bow to fairness this time, or will there be more of boxing's patented trickeration? We shall find out soon.

No Holds Barred: How I Crush The December Blues 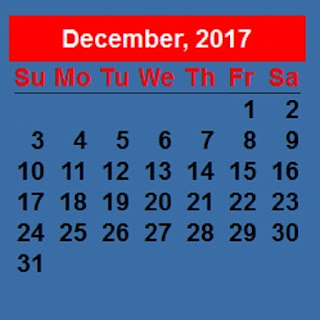 On this edition of No Holds Barred, host Eddie Goldman discusses how to crush the December blues, no holds barred style.

Among the topics discussed are how and why for many people December is the most alienating time of the year; the season of flagrant commercialism disguised as holidays; Saturday's Miguel Cotto-Sadam Ali fight at Madison Square Garden; this coming Saturday's Vasyl Lomachenko-Guillermo Rigondeaux fight, also at Madison Square Garden, including a possible decision dripping in trickeration, and why it may be named Arum's Revenge; the ESPN-HBO boxing rivalry; why my interest in wrestling is at a low point this year; the decision expected this week by the International Olympic Committee on whether or not the Russian team will be banned from the upcoming Winter Olympics in Pyeongchang, South Korea, because of Russia's state-sponsored doping program; the African Diaspora International Film Festival in New York, and documentaries in it about Malcolm X and C.L.R. James, and how James saw the relation between the sport of cricket and politics; my upcoming interview on BET's "The Rundown with Robin Thede"; the growth of Trans Boxing; and more.