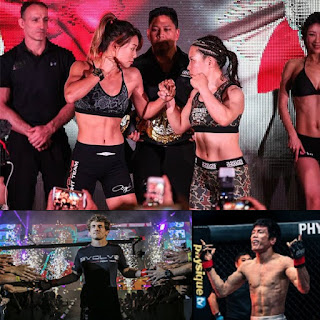 On this edition of No Holds Barred, host Eddie Goldman presents the September 14 international media conference call hosted by ONE Championship.

This call was to publicize their return to their home base of Singapore with a major show called ONE: Immortal Pursuit.

On the call were:

Chatri Sityodtong​ - ​Chairman and CEO of ONE Championship

ONE: Immortal Pursuit will feature these four fighters in title bouts.

Last year the undefeated Angela Lee won a close but unanimous decision over Mei Yamaguchi to capture the first-ever ONE women's atomweight title. This was the only fight in which Angela Lee had not stopped her opponent. Now the rematch is set for this card, and is the third defense of her belt.

In what he has said will be his retirement fight, the undefeated Ben Askren will take on submission specialist and former ONE lightweight champion Shinya Aoki in a welterweight title fight.

All the fighters discussed their careers and their approach to their fights. In addition, Chatri Sityodtong discussed the continued growth of ONE Championship and their plans for the future.

ONE: Immortal Pursuit takes place Friday, November 24, at the Singapore Indoor Stadium in Singapore. More details about this show are expected to be announced shortly. 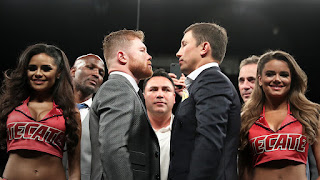 You won't find me regularly offering public predictions about major fights. It is not that I am fearful of being wrong, since on the occasions when I am wrong, I'm mostly upset at myself, as contradictory as that may sound. The reason is that I am already heavily involved in all sorts of controversies about corruption, excessive dangers, bad governance, etc., in the combat sports, and I'd prefer not to have those issues clouded by battles over who will win legit fights.

There are exceptions, of course, so when I was asked to make a prediction for the Santa Cruz-Frampton 2 fight for the official program, I complied. And I have done so once again for the Golovkin-Canelo official program.

Right or wrong, here again (I've already discussed this on No Holds Barred) is that prediction:

The obviously important fight between Gennady "GGG" Golovkin and Saúl "Canelo" Álvarez should also be an entertaining battle. The larger Golovkin often starts slowly, finding his range and testing his opponent's power. That could allow Canelo to rack up some points early. As the fight progresses, however, Golovkin should be able to break and wear Canelo down, dominate the fight, and score a late stoppage, even if the scorecards make it seem closer than it actually was. Golovkin by late TKO.

There are several caveats, however. Canelo is likely to rack up points in the early rounds, as even Golovkin's trainer, Abel Sanchez, recently indicated in the prefight conference call. Golovkin notably started slowly to gather information in his last two fights, first against Kell Brook, whom he defeated by fifth-round TKO, and then against Danny Jacobs, whom he defeated by a somewhat controversial unanimous decision.

If, as I predicted, Golovkin is able to stop Canelo, the scorecards will become historical footnotes. I noted that he should "score a late stoppage, even if the scorecards make it seem closer than it actually was."

This is where boxing's trickeration comes in. And what, you may inquire, is trickeration? As far as I can tell, the term entered the unofficial vocabulary of American English in a 1931 song of that name written by Harold Arlen and Ted Koehler and popularized by singer and entertainer Cab Calloway. The lyrics are:

Just follow me,
And you will see,
What folks in Harlem
Call Trickeration.

Rhythm, look what you went and done,
Rhythm, you are the guilty one.

Another phrase,
Just another craze,
Everyone in Harlem
Does Trickeration.

The term received a new meaning years later in boxing, when it no longer meant that it "Don't mean a thing". The esteemed etymologist and linguist Don King frequently used the term to describe trickery in boxing, a phenomenon with which he was somehow quite familiar.

While the Golovkin-Canelo fight has all the markings of being a treat for fight fans, it also could be a target for trickeration.

If my prediction is incorrect, and Canelo manages to go the distance with Golovkin, will the scorecards reflect what happened in the fight? Suppose Canelo legit wins the first three rounds. If he wins just two of the next nine rounds, and does not get dropped, it should be 7-5 for Golovkin. That gives the judges a lot of wiggle room, even if there is a knockdown in the fight.

Canelo is by far the most popular and main revenue-producing fighter for Golden Boy Promotions. He is also HBO's last pay-per-view star.

Would any of this influence the judges assigned by the Sin City Athletic Commission? Would yet another controversial and disputed decision set the stage for a lucrative rematch or even trilogy to milk this rivalry for more than it is worth? Would fans not be put off by yet another disgraceful decision in a sport that makes corpses blush?

My concern is not trying to justify my prediction. If Canelo wins legitimately by knockout or decision, or if the fight is actually one of those which is too close to call or could have gone either way, so be it and fantastic.

Perhaps warning about the possibility of trickeration beforehand could prevent it. And perhaps that is mere naive and wishful thinking. So while it is still too early to think about Halloween, we shall see Saturday night whether or not we have an early trickeration or treat dilemma, and are played for suckers once again. 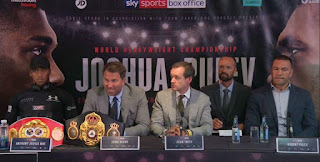 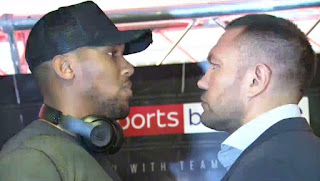 Only because I was already up and doing things -- a rarity for me on a Monday or any other morning -- I watched the live stream of the Anthony Joshua-Kubrat Pulev press conference.

Joshua (19-0, 19 KOs), who turns 28 on October 15, defends his IBF and WBA heavyweight belts against the IBF mandatory Pulev (25-1, 13 KOs), who turns 37 on September 19. This fight takes place October 28 at the Principality Stadium in Cardiff, Wales, U.K., where this press conference also took place.

Basically it was quite a civil and non-eventful press conference. No chairs or tables were tossed, no punches were thrown, and the language was quite fit for both newspapers and TV.

They will no doubt fill the building, which hosts rugby, football, and other events, has a retractable roof, and has a maximum capacity of 74,500. They will also do well on the U.K. pay-per-view on Sky Sports Box Office, without the staged hysteria and theatrics typical of those combat sports events which imitate the sordid W"W"E.

There were a few interesting things, though. Promoter Eddie Hearn, in touting Pulev as a worthy challenger for Joshua, said, according to The Ring, whose nickname he noted as "The Bible of Boxing", Pulev was ranked as a heavyweight only behind Joshua and WBC champ Deontay Wilder. I didn't bother to check this propaganda sheet for Golden Boy, but if that is true, where do they rank former Golden Boy fighter and unbeaten WBA mandatory Luis "King Kong" Ortiz? If you aren't already a non-believer, or at least a boxing atheist, this should make you one.

Also, so far there is no official word on if or when Showtime, with whom Joshua is contracted, will show this in the U.S. A live telecast from Wales would mean it would start on Showtime in the U.S. in the afternoon, about 5 PM EDT. But as of now, the schedule for Showtime's main channel lists a marathon of their series "Shameless" for that time. Perhaps, since it is still Monday morning here, they are still asleep.

And if you must see it, although it apparently isn't on the Sky Sports Boxing web site, a video of this press conference is already on YouTube:

Now it's time for me to catch up on watching last night's episodes of "The Orville", "Insecure", and "Ray Donovan".