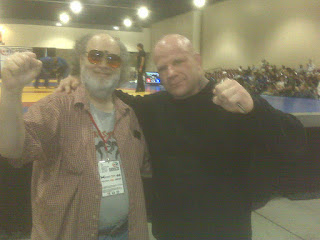 We spoke with Jeff Monson by phone Wednesday night about what really happened on this trip to Russia. He said that despite the loss in the fight, he was treated "great", including by Fedor, who actually apologized to him after the fight, although he had done nothing outside the rules. We discussed his recovery from these injuries, what happened in the fight, why there was almost no action on the ground, the enormous support he received from the Russian fans, his desire to return to fight in M-1 Global, how he wants to move down to light heavyweight, his busy schedule of fighting and seminars, his desire to be more involved with catch wrestling, and much more.