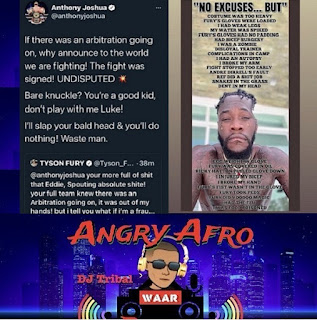 On this special edition of the WAAR Room on Angry Afro Radio, DJ Tribal AKA Chris Baldwin and Eddie Goldman discussed the chaos in the heavyweight division involving Tyson Fury, Anthony Joshua, and Deontay Wilder.
Just a day after Fury posted a video confirming that he had agreed to fight Joshua for the undisputed world heavyweight championship on August 14 in Saudi Arabia, news broke that appeared to prevent that fight from occurring, at least for now. An arbitrator ruled that a clause in the contract for Fury's last fight against Wilder, won by Fury in February 2020, mandating yet another match between these two, was indeed still valid. Fury and Wilder had also fought to a controversial split draw in December 2018 in a fight most observers felt Fury had won. Wilder had demanded the arbitration after a deal for a third fight between Fury and him had not been reached. Fury's co-promoter, Bob Arum, had told Joshua's promoter, Eddie Hearn, that he was certain that his side would win in the arbitration hearing since they claimed that the rematch clause had expired, but the arbitrator ruled otherwise. As this was binding arbitration agreed upon by both sides, the only choices for Fury's side were to immediately arrange a third fight with Wilder, or to try to get him to accept step-aside money to allow the Fury-Joshua fight to proceed, something both Fury's and Wilder's camps said would not happen.
We discussed what this now means for the heavyweight division, what are the likeliest next fights for each fighter, how Hearn's apparent acceptance of Arum's assurances of what the arbitrator would rule sank the plans for the Fury-Joshua fight for this summer, and much more. We spoke on Thursday afternoon, May 20, 2021.
A subscription is required to listen this show, so subscribe today to support independent journalism on the No Holds Barred Patreon page.
The video of our discussion will also be posted on Angry Afro Radio.