No Holds Barred: Kevin Carter on the Rise and Decline and Rise of Sumo in America (Part One) 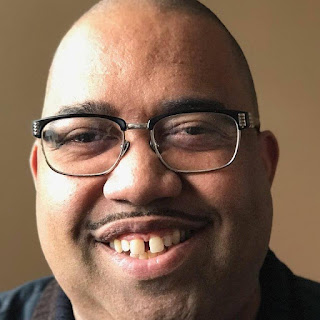 On this edition of No Holds Barred, host Eddie Goldman spoke with sumotori, judoka, writer, and intellectual Kevin Carter. This is the first of a two-part interview.
We spoke with him by phone Wednesday, April 14.
For Kevin Carter, sumo has been a lifelong passion. While growing up, "I would come home after school, and the only thing I really watched on TV was sports," he said. "I watched a lot of baseball, football, basketball. I also played hockey, too. But I was watching every Saturday that I could, and very occasionally they'd put on sumo.
"I immediately fell in love with sumo. It was like, 'this is great, man!' These are guys who are obviously athletes."
This was in the late 1960s and early 1970s, and many of the greats of Japanese sumo at that time were sometimes featured on the sports highlight shows of that era.
"I just totally fell in love with sumo."
He still had not competed in sumo, though. When he was at Harvard, he played football. He had developed an affinity for Japanese culture by the time he began a career in journalism, covering sports for the Philadelphia Inquirer. Later he began writing about culture, music, and arts for that newspaper.
One day while watching Philadelphia's channel 10 (WCAU-TV, which was a CBS station at that time), he saw a feature on a huge African-American wrestler named Manny Yarbrough. He immediately resolved to do a story on him. That led him to interviewing both Manny Yarbrough and his judo and sumo coach, Yoshisada Yonezuka, who ran the Cranford Judo Karate Center in Cranford, New Jersey.
It proved to be a life-changing moment. "I want to do this, too," he said, and so he did, in both sumo and judo.
Among the sumo events in which he competed, he recalled, was a special U.S. vs. Canada tournament in 1993 in Hamilton, Ontario. He finished with a record of 9-6 and won a technique prize.
He continued training with Manny Yarbrough, who was having greater success than him. In 1992, the first amateur sumo world championships were held. Manny Yarbrough won a silver medal that year in the open weight division, the first of five world medals he would win. In 1995, Manny Yarbrough won a gold medal at the amateur sumo world championships, still the only American to win a world championship at this event.
Many members of the U.S. team at that time were Hawaiian. Kevin Carter described that period as a "dynasty of Hawaiians in amateur sumo." Sumo had become popular in Hawaii at least as early as the 1960s, and was a school sport there as well. In 1995 and 1996, he did his graduate work in Asian history at the University of Hawaii, and had a chance to train and compete in sumo while there.
After a brief foray into MMA, Manny Yarbrough went from amateur sumo into a venture trying to establish professional sumo in the U.S. In 1998, an event called "Night of the Giants" was held in Atlantic City, New Jersey, at what was then the Trump Taj Mahal. It was taped for delayed showing on ESPN, and Kevin Carter worked with the show's promoters as a TV commentator and in helping run the tournament.
But many things went wrong with the show. First off, the promoters wanted to build it around Manny Yarbrough, who by that time had built a following, especially in that region. But Manny lost in the first round of the tournament, which was eventually won by Mark Robinson, who had already defeated him in the 1996 amateur sumo world championships. In addition, there was no agreement on how this show and event would be positioned. Many of the people running it wanted it to be a spectacle, a la the WWF of that time, while others, like Kevin Carter, wanted it run like a sport. With all these problems, he said, the show was "one and done."
That failed event and what was happening in general with American sumo would also prove to be the beginning of the end of Kevin Carter's involvement in the sport, at least for some time. We will discuss that more in the upcoming second part of our interview.
Please also subscribe to the No Holds Barred page on Patreon for much more No Holds Barred content.
You can play or download No Holds Barred on Podomatic and the Internet Archive. If one link does not work, please try another.
No Holds Barred is also available on these sites and apps:
Google Podcasts
Amazon Music
Apple Podcasts
Stitcher
Spotify
Anchor
The Podomatic Podcast Player app is available for free, both for Android at Google Play, and for iOS on the App Store.
The No Holds Barred theme song is called "The Heist", which is also available on iTunes by composer Ian Snow.
No Holds Barred is sponsored by:
LenneHardt.com, the home of Lenne Hardt, the legendary MMA and sports announcer, voice actor, singer, actress, and comedienne. Lenne is also known for her jazz vocals with her Lenne Hardt Jazz Cabaret Band. For more information, to book her, or to order a custom message from her, go to LenneHardt.com.
Skullz Fight Shop, home of the Skullz Double-End Bag, the perfect punching bag for your combat sports training. Skullz Double-End Bags provide a realistic striking target, and help improve speed, distance, and timing skills. Hang it and hit it right out of the box! No pump required. Skullz Fight Shop - Advancing combat sports equipment for the next generation of fighters. For more information, go to https://skullzfightshop.com.
Adolphina Studios. Original art prints and handcrafted fine jewelry. For more information, go to https://www.etsy.com/shop/AdolphinaStudios.