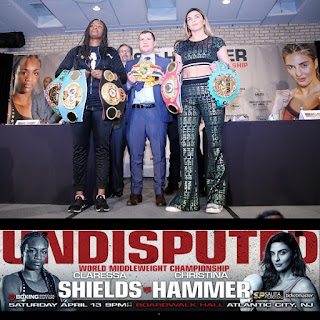 On Saturday, April 13, the 24-year-old Shields (8-0, 2 KOs) of Flint, Michigan, USA, who holds the IBF, WBA, and WBC belts, faces the 28-year-old Hammer (24-0, 11 KOs) of Dortmund, Nordrhein-Westfalen, Germany, who holds the WBO belt and is the WBC "Champion in Recess", never having lost that belt. The winner will be recognized as the undisputed women's middleweight champion of the world. Shields has also held the IBF and WBC super middleweight belts, and is a two-time Olympic gold medalist.

This fight will headline a card taking place at Boardwalk Hall in Atlantic City, New Jersey, and will be the main event of that card televised live in the U.S. on Showtime.

We spoke with both Claressa Shields and Christina Hammer at a February 26 news conference in New York. Both gave their views on what they each see as their advantages in this fight.

We also spoke with Jill Diamond of the WBC and World Boxing Cares on the advancement in recent years of women's boxing. And we discussed why this is an important fight and what to expect in it with our colleague Kristal Hart, who was shooting video for her show, the Kristal Hart Show.