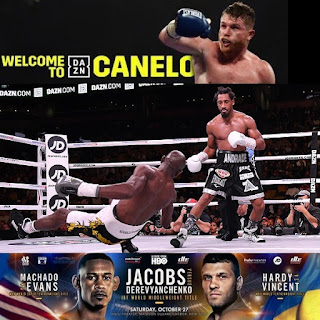 On this edition of No Holds Barred, host Eddie Goldman previews the October 27 fight between Daniel Jacobs and Sergiy Derevyanchenko for the vacant IBF middleweight belt. This fight takes place at the Hulu Theater at Madison Square Garden, and will headline a card shown in the U.S. on HBO on its next-to-last boxing telecast.

We spoke with Daniel Jacobs, Sergiy Derevyanchenko, and promoters Eddie Hearn and Lou DiBella on this week's media conference call about this fight. We also discussed the possibility of creating a tournament to unify the various middleweight titles.

Before that, an analysis is given of why there are now five so-called middleweight world champions, and the obstacles to unification. Besides the usual suspects of the sanctioning bodies, the effect of these recently-signed big money TV and streaming deals in the U.S. in blocking the best from fighting the best is examined.