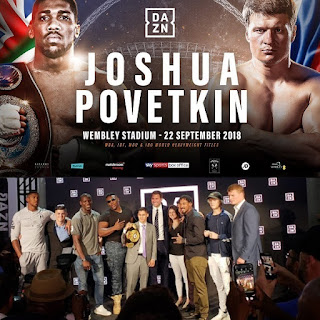 On this edition of No Holds Barred, host Eddie Goldman spoke with James Rushton, the CEO of the DAZN sports streaming media company.

This week it was announced that DAZN, which is already in Germany, Austria, Switzerland, Japan, and Canada, and will soon launch in Italy, would be starting its OTT (over-the-top) streaming service in the U.S. on September 10. The first live offering will be the September 22 card headlined by the heavyweight title fight between Anthony Joshua and Alexander Povetkin. About 70 fight nights a year, in both boxing and Bellator MMA, are planned for their U.S. service, with more sports expected to be added in the future. The initial price will be $9.99 a month, with the first month free.

We spoke with James Rushton about DAZN's plans for the U.S. at the kickoff media event in New York on Tuesday.

In addition, we open with a commentary on that media event, and an analysis of what DAZN is offering, why it is impressive, and what they need to do to succeed.

Joshua vs. Povetkin Is The Right Fight At The Right Time 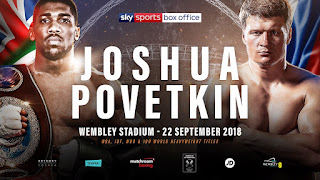 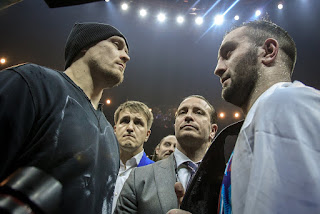 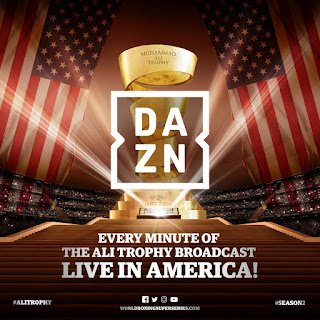 This is shaping up to be one of the most important weeks for boxing this year, and surprisingly so during the hot and sweaty summer months we are enduring in the Northern Hemisphere of our struggling planet Earth.

This Saturday, July 21, at the Olimpiyskiy Stadium in Moscow, Russia, another potential fight of the year candidate will take place, the cruiserweight finals of the World Boxing Super Series. In it, the WBC and WBO champion, Oleksandr Usyk of Ukraine, with a record of 14-0 and 11 KOs, will face the WBA and IBF champion, Murat Gassiev of Russia, with a record of 26-0 and 19 KOs. Two undefeated champions, all four major belts on the line, and the winners earning their place in the finals by triumphing thus far in this eight-man tournament. Plus, each of their semifinal fights, where Usyk got a majority decision over previously unbeaten Mairis Briedis in January, and Gassiev stopped previously unbeaten Yunier Dorticos in the 12th round in February, with each victor having two of those major belts with their wins, were, in my opinion, leading candidates for fight of the year so far in 2018.

Since this was one of the rare times that boxing behaved like a real sport, it was no coincidence that the American TV networks passed on showing this tournament. Instead they fed us, and increasingly made us pay extra for, their steady diet of purposeful mismatches, showcase fights, and recycling of faded former belt holders. Even this cruiserweight final, which will be shown in numerous countries, has no U.S. TV outlet just a few days before the fight. It thus is likely that the World Boxing Super Series, as they have done in the past, will stream this fight in the U.S., hopefully for free.

For the upcoming season two of the WBSS, however, what was essentially an American boycott of the product will end. The new streaming service DAZN, which launches in the U.S. this fall, has picked up the rights in a reported three-year deal. Along with everything else DAZN will be showing, including 32 shows from Matchroom Boxing, equally based in the U.S. and U.K. or nearby, this could quickly make DAZN the number one video source for boxing in America.

This Tuesday in New York, there will be a media event where the details of DAZN’s U.S. launch will be announced, including when it starts and how much it will cost. It has already been confirmed with Matchroom Boxing that both Anthony Joshua and Alexander Povetkin will be in attendance at the media event, which is also supposed to be live streamed.

With the announcement Monday that Joshua and Povetkin will be facing each other Sept. 22 in London’s Wembley Stadium in front of an expected crowd of 90,000 or so, and shown in the U.K. on Sky Sports Box Office, it thus seems quite likely that Tuesday will be the official announcement that the Joshua-Povetkin fight will headline the DAZN U.S. debut show. The only surprise would be if that were not the case.

While some “Make American Boxing Great Again” types are whining that Joshua is not next facing WBC champ Deontay Wilder of the U.S., this fight with Povetkin is the right fight at the right time for Joshua, and actually in many ways more important that a unification fight with Wilder.

First off, Joshua, 28 years old and from the U.K., and with a record of 21-0 with 20 KOs, holds the WBA, WBO, and IBF belts. His goal, obviously, is to become undisputed heavyweight champion of the world, a distinction not achieved since Lennon Lewis did it a generation ago. Povetkin, who turns 39 on Sept. 2, and from Russia, has a record of 34-1 with 24 KOs. Both Joshua and Povetkin have been Olympic gold medalists. Povetkin is the WBA mandatory challenger for Joshua, and also the WBO number one contender, and thus maybe a mandatory there as well, although alphabet soup sanctioning bodies work in mysterious ways.

If Joshua wants to become undisputed heavyweight champion, he must juggle the requirements of these various outfits to retain all the belts. That means occasionally at least fighting one of their mandatories. If, as he is favored to do, Joshua defeats Povetkin, then he can face Wilder at a later date for all four major belts. And that fight then would be massive as well.

But there is more to this fight than simply satisfying the need to face some mandatory challenger deemed worthy by a sanctioning body. Povetkin, though aging, is a legitimate heavyweight contender, and a dangerous one at that. Among the fighters whom Povetkin has defeated are Chris Byrd, Eddie Chambers, Ruslan Chagaev for the WBA belt in 2011, Marco Huck, Manuel Charr, Carlos Takam, Mike Perez, Mariusz Wach, Johann Duhaupas, and Christian Hammer. In his most recent fight, on March 31 of this year, he knocked David Price out cold in the fifth round. Of course, Povetkin had himself been knocked down in the third round and Price has a history of being knocked out. While Povetkin has certainly slowed a bit with age, this was a scary knockout and still showed that he has power.

Povetkin’s only defeat was a lopsided decision loss in 2013 to a still-dangerous Wladimir Klitschko, in which Povetkin hit the canvas four times. But even then, five years ago, Klitschko, who was in those days winning most of his fights by knockout or TKO, could not stop Povetkin.

Now compare that with the list of opponents Wilder has defeated. His best win was also in March of this year, when he stopped Luis “King Kong” Ortiz. Before that, his opponents comprise a list of has-beens, never-wases, and never-will-bes, carefully handpicked by his advisor Al Haymon and the suits at his main TV network, Showtime. His only value is that he holds the one piece of the puzzle missing for Joshua to claim to be undisputed heavyweight champion of the world. Yes, Wilder has a powerful right hand, but his boxing skills are so laughable that he has earned an unofficial nickname of “Windmill”.

Only some Americans have drunk the Wilder Kool-Aid and passionately want a Joshua-Wilder fight. That will likely come one day, as it is certain to be a big money fight, but it is also a fight that Joshua really doesn’t need except for winning that additional belt. Wilder is not a big draw either on TV or in arenas, be they in his home state of Alabama or in the Barclays Center in Brooklyn, where he has failed to sell the place out in his three appearances there.

Povetkin is more of an international star anyway. Many of his earlier fights have been in Germany, with his more recent ones being in Russia and his last one, with Price, as a co-main event on the Joshua-Joseph Parker card in Cardiff, Wales.

So Joshua fighting Povetkin next makes sense in more ways than one. Of course, Joshua is younger, stronger, more agile, and more powerful than Povetkin, and expected to win. But at this point, there is no one in the heavyweight division who could conquer the popular and charismatic Joshua.

If Joshua gets past Povetkin, there is also no urgency for him to take on Wilder next. Some in the dwindling American boxing media might howl, but most of them know as much about boxing as the author of “Howl”, the late Beat poet Allen Ginsberg. If you’re not familiar with that poem, you can look it up online if you really want to, as I won’t distract you with it.

Lurking somewhat out of the shadows nowadays is former heavyweight champ, and still undefeated, and still, surprisingly, listed as just 29 years old, Tyson Fury. His comeback fight, after a two and a half year layoff due to a drug suspension and major physical and mental problems, in June was a complete farce, where he faced cruiserweight Sefer Seferi. The most notable moments were both men dancing the Ali Shuffle, and Fury stopping to look at a real fight in the crowd during the second round. Seferi quit after four, and before even anything resembling a sparring session had commenced.

But a Joshua-Fury fight, with all the expected clowning and jabbering leading up to it, would likely break all U.K. records for a boxing event and would also be a humongous worldwide spectacle. If Fury could in his next fight, in August against the faded Francesco Pianeta, demonstrate that at least he can still fight on a more or less decent level, then a cashout fight with Joshua may not be far off. Joshua has to get Fury before Fury possibly self-destructs again, an unwelcome but far from remote occurrence.

Joshua has also made clear on many occasions that he wants to fight all over the world, including in Africa, the Middle East, and Asia. Already opponents are building, or perhaps padding, their records to be in place for those paydays. Where does that leave Wilder, and a fight for Joshua in the U.S.? Take a number, and be seated, please.

THe world of boxing in 2018 appears to be rapidly changing. Europe and mainly the U.K. are the main centers of world boxing and home to many of the most important and lucrative fights. DAZN in the U.S. could, if their streaming doesn’t suck, become more popular for boxing than Showtime, HBO, and ESPN. And New York, where the American headquarters of both DAZN and Matchroom Boxing USA are, could regain its status as the U.S. capital of boxing from Las Vegas, where the casinos seems to be otherwise focused.

It’s an exciting time for boxing, both in and out of the ring. Now, oh promoters, networks, managers, and fighters, don’t screw it up.