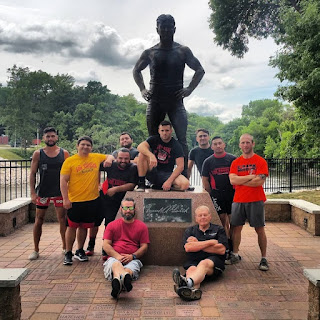 We spoke with him by phone Friday.

There is a lot happening in the coming weeks in catch wrestling, including a tribute to Joe Stecher, who was a world heavyweight wrestling champion in the days before professional catch wrestling ceased to be a sport. This event is called "Joe Stecher Days" and takes place July 14-15 in the village of Dodge, Nebraska, Stecher's hometown. Raul Ramirez will be there, along with wrestling author and historian Mike Chapman, who will be a guest speaker.

Also on July 14, there will be an eight-man catch wrestling tournament organized by the Snake Pit U.S.A. at the Primal Gym in Hamilton, New Jersey. There undefeated Catch Wrestling Alliance wrestler Curran Jacobs will be competing.

We discussed all these, including Curran Jacobs's preparation for these tournaments, and how strength and conditioning is essential to being able to carry out his strategy.

"Personally I feel that that is the key to winning, regardless of your sport. So if you're really into competing at the highest level, having a good strength and conditioning coach is really the key," said Raul Ramirez.

"You do have to spend your time wrestling to get better at wrestling. But in order to minimize injuries, to make sure you're as strong as you can be, to make sure you have enough gas in your gas tank when you compete, especially in tournaments where you might have to have several matches, or at catch wrestling tournaments when we have a 20-minute match, you need this endurance. So having a good strength and conditioning coach can get your body to that level."

We also discussed that this year's Gotch Tournament will feature matches by both veteran wrestlers and new competitors, plans to hold mixed-styles grappling and catch wrestling matches in Singapore this year, and much more.