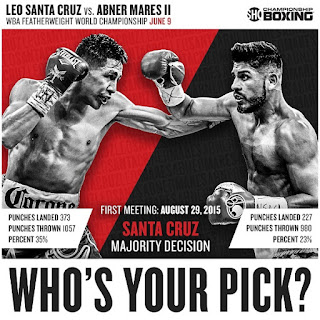 On this edition of No Holds Barred, host Eddie Goldman spoke with Leo Santa Cruz and Abner Mares, who have their long-awaited rematch Saturday, June 9, at the Staples Center in Los Angeles.

In their first fight, on August 29, 2015, also in the same building, Santa Cruz, who won by majority decision, and Mares threw a total of over 2000 punches. This rematch will also be contested at featherweight. It will be shown live in the U.S. on Showtime.

We spoke with both Leo Santa Cruz and Abner Mares on a a recent media conference call. We also comment on this card's co-feature of WBC 154-pound champ Jermell Charlo against former champ Austin Trout, this Saturday's comeback fight of heavyweight Tyson Fury, the WBO welterweight fight between champ Jeff Horn and the masterful Terence Crawford moving up in weight for this fight, and much more.