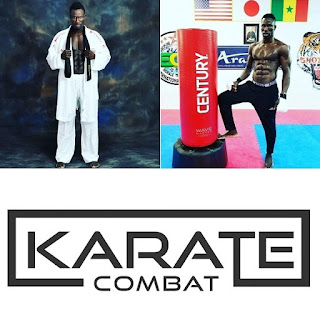 On this edition of No Holds Barred, host Eddie Goldman spoke with karate instructor and fighter Elhadji Gaye Ndour.

He will be fighting in the main event on April 26 of the debut show of the new professional full contact karate league, Karate Combat.

We spoke with him by phone Saturday.

Originally from Senegal and now living in Long Island, New York, he has been nicknamed "Black Magic" and has fought in numerous amateur sport karate events around the world. But he noted that in some of his fights, he had actually been disqualified because, he said, he hit or kicked his opponents "too hard" or even scored knockouts.

"That doesn't make sense," he said. Now with the formation of this full contact karate league, he believes that he will be able to display all of his skills.

"They created this league to give the athletes the opportunity to hit hard and kick hard. That's why it's very interesting," he said.

"I don't have a second mind to know that this league is going to go far. It's going to be very, very interesting to watch," he said.

"Karate Combat will be the best league on this planet.

"One day is going to come and you're going to say, 'Oh, I interviewed this 'Black Magic' and he told me that.'

Obviously having great confidence both in his skills and the potential of this new organization, we also discussed his background. He is still working a day job five days a week while instructing and training in karate on nights and weekends. "We do it for passion," he said. Now he will also have the opportunity to earn income from his fights.

We also discussed the Karate Combat rules, which allow throws and five seconds to punch on the ground; how he now has improved his training and eating for fighting professionally; how he still hopes to compete in karate in the 2020 Tokyo Olympics; how he was introduced to the Karate Combat people; and much, much more.