No Holds Barred: Scott Coker on DAZN and Bellator 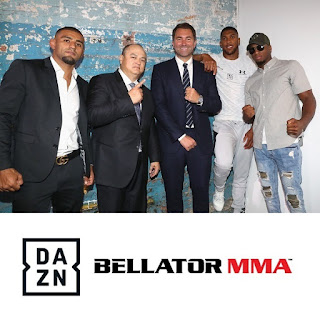 On this edition of No Holds Barred, host Eddie Goldman spoke with Scott Coker, president of Bellator MMA.

We spoke with him at the media event announcing the U.S. debut of the streaming service DAZN, which took place in New York Tuesday.

Bellator will provide an important part of DAZN's programming, which in the U.S. at first will feature the combat sports of boxing and MMA.

With DAZN launching September 10, their first live show will be on September 22, and headlined by the heavyweight boxing title fight between unified champion Anthony Joshua and former WBA champion Alexander Povetkin, from London.

DAZN's first live Bellator card will be shown the following week, on September 29, and exclusively in the U.S. on DAZN. It will feature Gegard Mousasi vs. Rory MacDonald in a middleweight title fight, and veterans Quinton "Rampage" Jackson vs. Wanderlei Silva. Bellator returns to DAZN October 12 with a card headlined by Matt Mitrione vs. Ryan Bader in their heavyweight Grand Prix semifinals, which will be simulcast on the Paramount Network. Bellator, with the new rights fees from DAZN, will be having a ten-man welterweight Grand Prix tournament, also exclusively on DAZN.

Asked about the structure of the arrangement between the Viacom-owned Bellator and DAZN, Scott Coker said, "It's just strictly a license deal, but it allows us to put some of our biggest fights on this platform, because they want to be in the big fight business, and we're going to deliver that. So to me, it was a win-win."

He added, "This is the ground floor. And this will become a full-blown sports channel at some point. But when you talk about combat sports, man, Eddie, what a great value."

By the time DAZN launches in the U.S. in September, it will be available in seven countries.

"I've heard rumors that they're going to expand into another ten countries before the end of next year," he said.

We also discussed the many fights coming up in Bellator, how this deal lets them show pay-per-view level fights on DAZN for the regular monthly fee of US$9.99, Bellator's mix of veteran and up-and-coming fighters including young wrestlers, how Bellator is recruiting top Olympic-level wrestlers, why Fedor Emelianenko is the greatest MMA fighter of all time, and much more.