Don't Be A Sucker: Mayweather-McGregor Edition 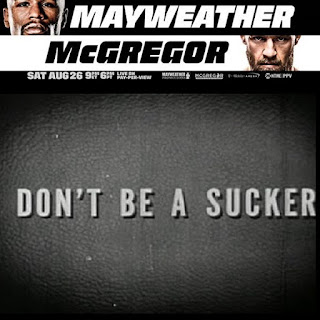 There has suddenly been renewed interest in an obscure 1947 short film produced for the then-called U.S. Department of War called Don't Be a Sucker! The basic theme of this film is anti-racist and anti-fascist, and exposes those who would like to bring Nazism to America.

While this 70-year-old film is surely quite dated, and its message severely limited by the prevailing prejudices of the time, it nevertheless has been reposted online by many following the recent riot by various fascists, Nazis, and white supremacists in Charlottesville, Virginia.

The film gained even wider attention when Trump declared that the fascist rioters included "very fine people" -- exactly the kind that the U.S. War Department warned against in this film.

While fascism, white supremacy, etc., may be the real big cons, the combat sports world is full of its own, however lesser the consequences may be. The biggest con today, which is apparently getting lots of modern-day suckers to empty their wallets, is the upcoming farcical mismatch between Mayweather and McGregor. And true to many cons, this one has utilized racism, misogyny, anti-LGBT bigotry, and vulgar hysteria to try to peddle its damaged goods.

Some of the best minds in boxing and the combat sports, each with many decades of experience in them, have already commented on and deconstructed this scam. There is thus no need to repeat what has been said and written, nor any desire on our parts to revisit an issue which we would have been quite content to ignore and leave to those either who are part of this con job, or who have no knowledge or understanding of how they are being played for suckers.

So if you haven't already checked these out, here are the links to these articles and podcasts:

Mayweather-McGregor: "The Sting", by Frank Lotierzo.

No Holds Barred: John Perretti on the Mayweather-McGregor Scam.