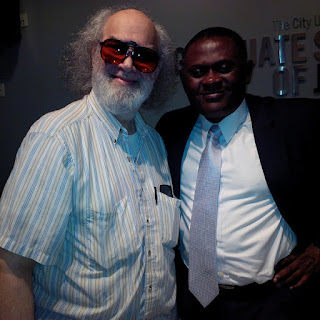 On this edition of No Holds Barred, host Eddie Goldman once again spoke with Dr. Bennet Omalu.

He was in New York Monday, August 7, to give a presentation at the CUNY Graduate School of Journalism in New York, and hosted by the New York Press Club, about his new book, Truth Doesn't Have a Side.

Dr. Omalu is the pioneering forensic pathologist who was the first to prove a connection between the head trauma and brain injuries which inherently result from playing American football, and the disease CTE, chronic traumatic encephalopathy.

We spoke with him right after this presentation, and mainly about why he included wrestling in his list of high-contact sports which children under the age of 18 should avoid, which are football, boxing, MMA, ice hockey, and rugby.

A study published September 2015 in the American Journal of Sports Medicine found that college wrestling has the highest rate of concussions of any college sport, including football. But as to rules changes in wrestling to make it safer, Dr. Omalu said, "I tend to defer to the sports experts, because I'm not an expert in many of these sports."

Dr. Omalu, however, sees wrestling's problems as being far deeper than just the levels of head trauma and brain injuries.

"The problem with wrestling is," he said, "there's no professional wrestling outside WWE.

"So if you, say, allow wrestling in children, that means you're encouraging children eventually to go into MMA or WWE. Does that make sense? So that is why I lump all of them together, because I see it as a spectrum."

In addition to his comments on the combat and contact sports, we add commentaries on some of the issues related to CTE, concussions, and combat sports. Those include the prevalence of concussions in judo, breaking the links between real wrestling and grappling and both WWE and MMA, the need for combat sports training for self-defense, and much, much more.