No Holds Barred: Keith Thurman, Danny Garcia, and the Honor of Champions 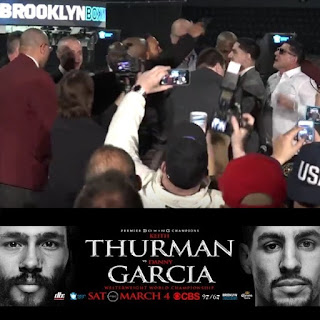 On this edition of No Holds Barred, host Eddie Goldman spoke with Keith Thurman and Danny Garcia about their welterweight title unification fight.

In addition, the issue of honor and the lack of honor of many boxing champions, including the potential implications of this past Saturday's postfight hotel lobby brawl involving Deontay Wilder, and the WBC's call for a boxing code of ethics to be implemented, are discussed.

WBA welterweight champion Keith Thurman (27-0, 22 KOs) and WBC welterweight champion Danny Garcia (33-0, 19 KOs) fight this Saturday, March 4, in the main event of a card billed as Showtime Championship Boxing on CBS, presented by Premier Boxing Champions, at the Barclays Center in Brooklyn, New York. This card will be shown live in the U.S. on CBS and in the U.K. on BoxNation.

We spoke with both Keith Thurman and Danny Garcia on a recent media conference call.