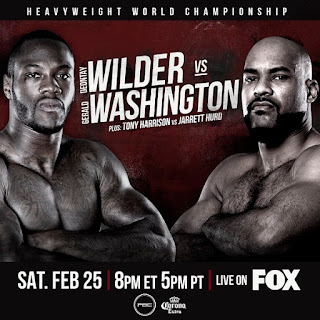 On this edition of No Holds Barred, host Eddie Goldman discusses the February 25 fight between WBC heavyweight champion Deontay Wilder (37-0, 36 KOs) and late replacement challenger Gerald Washington (18-0-1, 12 KOs). This headlines a Premier Boxing Champions (PBC) card taking place at the Legacy Arena in Birmingham, Alabama, in Wilder's home state. It will be televised live in the U.S. on Fox, and in Spanish on Fox Deportes, as well as in the U.K. on Sky Sports.

We spoke with both Deontay Wilder and Gerald Washington on this past week's media conference call.

Besides the fight itself, we also discuss the circumstances which led up to Washington being chosen as a late replacement, with the original opponent testing positive for a banned performance-enhancing drug, and also the situation involving the positive PED test for Alexander Povetkin, who was supposed to fight Wilder last year. All these tests were conducted by VADA, the Voluntary Anti-Doping Association, as part of the WBC's Clean Boxing Program. And we also comment on the potential for title unification in the heavyweight division, and much more.