No Holds Barred: The Return of PBC, America's Number One Boxing TV Series 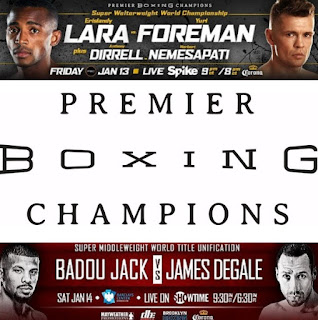 On this edition of No Holds Barred, host Eddie Goldman previews the Lara-Foreman and DeGale-Jack fights coming up this weekend, and discusses why the Premier Boxing Champion, the PBC, is by far America's number one boxing TV series.

We spoke with James DeGale and Badou Jack on a recent media conference call.

We open with a discussion about why boxing is a primarily TV sport, and how all the shills, propagandists, nitwits, incompetents, and zombies writing in boxing's multitude of fake news sites have missed or failed to report one of the top boxing stories in the U.S. for 2016: the PBC is by far America's number one boxing TV series.

Here, based on compiling TV ratings from Nielsen, are the most-watched boxing shows in the U.S. for 2016:

And for 2017, the PBC has said, beginning with this January 13 card, they will have more shows than in either of their first two seasons.