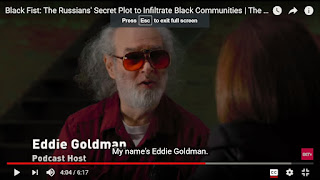 I am proud to note that the segment in which I was interviewed for BET's "The Rundown with Robin Thede" about the Russian troll operation known as "Black Fist" has been named one of "The 10 Best Late-Night Moments of 2017" on U.S. TV by Vulture, the culture and entertainment site from New York magazine.

"The Rundown with Robin Thede", which just started airing in October, has also made numerous lists for being among the best new late-night TV shows and the overall best new TV shows of the year. And it won the always-prestigious 2017 No Holds Barred Award for Best U.S. TV Show.

You can read that article here.

The segment from "The Rundown with Robin Thede" can be seen here: