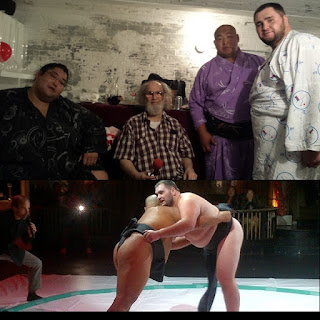 On this edition of No Holds Barred, host Eddie Goldman spoke with sumo wrestlers Byamba, Soslan, and Yama, and Andrew Freund of USA Sumo.

We spoke with them Friday night at the Nomiya Night sumo, food, and entertainment event at the Diamond Horseshoe nightclub at the Paramount Hotel in New York. The highlight of this event was a series of sumo demonstrations and exhibitions by the three wrestlers.

All three wrestlers have pro sumo experience in Japan and have also competed all around the world.

Byamba, whose real name is Byambajav Ulambayar and Japanese ring name Daishochi Kenta, is originally from Mongolia and is now based in the Chicago area. He was a 2006 and 2007 world amateur sumo champion at heavyweight, and has won at numerous other tournaments including the U.S. Sumo Open.

Yama, whose real name is Yamamoto Ryuichi and Japanese ring name Yamamotoyama Ryuta, is originally from Japan and is said to be the largest Japanese sumo wrestler ever.

Soslan, whose real name is Soslan Aleksandrovich Gagloev and Japanese ring name Wakanoho Toshinori, was originally from Russia and played college football since moving to the U.S.

Besides the wrestling exhibitions in a round-robin format where each wrestler faced the other a few times, members of the audience, who mostly had little or no experience in combat sports and martial arts, with some having no sports experience at all, also had a chance to try to wrestle them in some fun and humorous activity. Andrew Freund served as both announcer and referee for this event.

We discussed why they were attracted to sumo, what suggestions they have for people who want to train in sumo, how the fan-friendly sport of sumo can translate its appeal into becoming a popular sport outside Japan, and much more.

In addition, we open with a commentary discussing: Whither sumo?