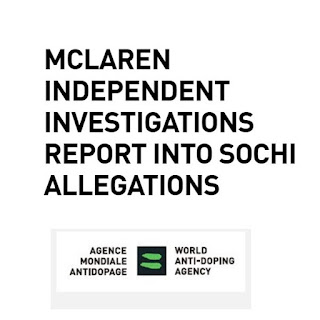 On this edition of No Holds Barred, host Eddie Goldman presents the audio from Monday's teleconference of the Toronto press conference with Professor Richard H. McLaren, law professor at Western University in London, Ontario, Canada.

The World Anti-Doping Agency (WADA) enlisted Prof. McLaren to lead the investigation and to issue a report about media reports of state-sponsored doping in Russia in sport. The 103-page Independent McLaren Investigation Report was also made public Monday.

The three key findings of this report are:

1. The Moscow Laboratory operated, for the protection of doped Russian athletes, within a State-dictated failsafe system, described in the report as the Disappearing Positive Methodology.

2. The Sochi Laboratory operated a unique sample swapping methodology to enable doped Russian athletes to compete at the Games.

3. The Ministry of Sport directed, controlled and oversaw the manipulation of athlete’s analytical results or sample swapping, with the active participation and assistance of the FSB, CSP, and both Moscow and Sochi Laboratories.

Unlike the many well-known situations where athletes decide to dope on their own, this was a state-sponsored doping program where failure to participate could harm an athlete's career.

While Prof. McLaren indicated that it was not part of the mandate for this report to investigate whether or not Russian athletes had been forced into the doping programs, he did say that they found evidence that "athletes who didn't participate in the program didn't get access to the best coaches, did not have the opportunity to compete at the highest levels of the national competition structure, etc. And in that sense they might feel forced into the system because if they didn't participate in the doping programs then they wouldn't have access to those different things I just described."

The complete McLaren Independent Investigations Report into Sochi Allegations can be read here.

Following the issuance of this report, the WADA Executive Committee made the following recommendations to the International Olympic Committee regarding Russian participation in the Rio Olympics, which start August 5:

"Given that the Russian Ministry of Sport orchestrated systematic cheating of Russian athletes to subvert the doping control process; and that, the evidence shows such subversion in 30 sports, including 20 Olympic summer sports and Paralympic sports, the presumption of innocence of athletes in these sports, and in all Russian sports, is seriously called into question.

The crisis in the Olympic movement continues to worsen, and there will surely be many more developments to come.