No Holds Barred: Steve Koepfer on Why and How Combat Wrestling Is Growing 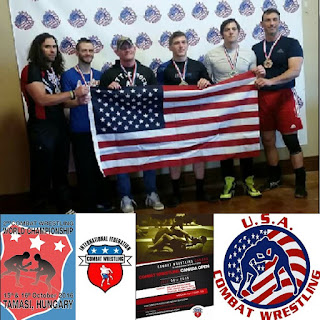 On this edition of No Holds Barred, host Eddie Goldman once again spoke with Steve Koepfer, the owner and head coach of New York Combat Sambo.

Among the many types of events in which he is involved is combat wrestling. He also serves as the Secretary General of USA Combat Wrestling.

While tournaments were held in Japan in combat wrestling as a form of submission wrestling in the 1990s, run by its founder, Mr. Noriaki Kiguchi, it was only in 2013 that the FICW was created.

Plus, following the accepted norms for good governance for international sports federations, FICW is a nonprofit organization.

USA Combat Wrestling is also a 501(c)(3) tax-exempt nonprofit organization. "We're very transparent. All our finances are transparent," he said. "People can look us up."

In fact, he also noted that this nonprofit status has proved to be key for USA Combat Wrestling to gain sponsors. This year the trips of all members of the USA Combat Wrestling 2016 National Men's Team to the 2016 world championships will be paid for by sponsors, with these sponsors thus receiving a tax break.

Thus both internationally and in the U.S., combat wrestling has made remarkable progress in a relatively short period of time.

"Look what we've done in two years of combat wrestling," he said. "When you have a group of like-minded people who will actually do what they're going to do and make sacrifice and agree that, hey, I don't have to be the top dog in this organization. I can be the secretary and not the president of USA Combat Wrestling, and in fact I don't have to be on the board of FICW. I don't care about that. I just want to see the sport grow."

We also discussed in depth the rules of combat wrestling, where matches are won by submission or points, including points for a pin; the Combat Wrestling Canada Open, which takes place this Saturday, July 9, at the College Notre Dame in Montreal, Quebec; what the disparate and scattered catch wrestling organizations can learn from combat wrestling; how the growth of jiu-jitsu in recent decades has helped the development of many other grappling and wrestling styles and rulesets, including combat wrestling; plans for more tournaments to be held; and much, much more.