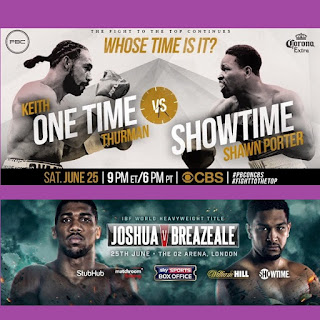 This Saturday, June 25, WBA welterweight champion Keith Thurman (26-0, 22 KOs) puts both his belt and his unbeaten record on the line against former IBF champion Shawn Porter (26-1, 16 KOs) in what is expected to be both an action-packed and highly competitive fight. This fight takes place at the Barclays Center in Brooklyn, and will be televised live in the U.S. on CBS and in the U.K. on Sky Sports.

We spoke with both Keith Thurman and Shawn Porter on a recent media conference call. While each fighter predicted victory, they agreed on one thing: this fight will not go to the judges.

Also on Saturday, June 25, the IBF heavyweight champ Anthony Joshua (16-0, 16 KOs) and the challenger Dominic Breazeale (17-0, 15 KOs) headline a card at The O2 in London, which will be shown live on Sky Sports Box Office in the U.K. The Joshua-Breazeale fight will also be shown live on Showtime in the U.S. We spoke with both Anthony Joshua and Dominic Breazeale on Monday's conference call, and got their predictions as well.