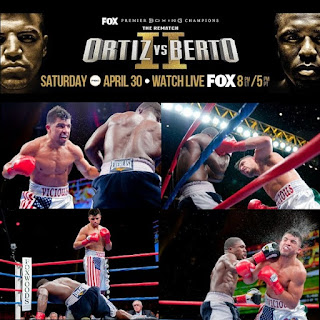 On this edition of No Holds Barred, host Eddie Goldman previews the April 30 fights between welterweights Victor Ortiz and Andre Berto, and light heavyweights Edwin Rodriguez and Thomas Williams Jr.

These fights take place this Saturday at the StubHub Center in Carson, California, and will be shown live in primetime in the U.S. in English on Fox and in Spanish on Fox Deportes.

Victor Ortiz (31-5-2, 24 KOs) and Andre Berto (30-4, 23 KOs) first met five years ago, on April 16, 2011, in a wild fight of the year that saw both met him the canvas twice over the 12 rounds of the bout. Although Ortiz was the underdog going into this fight, he won a unanimous decision victory as well as capturing Berto's WBC title and handing him his first pro loss.

Since then, both fighters have had their ups and downs, with Ortiz going 2-3 and Berto 3-3, with each man losing to Floyd Mayweather along the way. So this rematch, a 12-round welterweight bout, besides likely guaranteeing fireworks in the ring, is crucial for both fighters at this stage of their careers.

Light heavyweights Edwin Rodriguez (28-1, 19 KOs) and Thomas Williams Jr. (19-1, 13 KOs) are still both contenders and have each yet to win a world title belt. This fight, a ten-round affair, also promises to feature their knockout power and put them closer to that title shot, perhaps against WBC champ Adonis Stevenson.