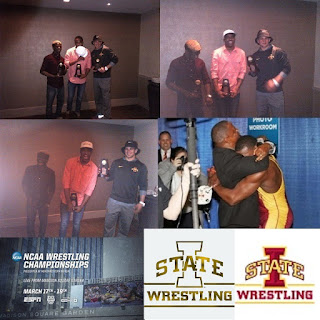 On this edition of No Holds Barred, host Eddie Goldman spoke with Iowa State Wrestling's trio of 2016 NCAA All-Americans: Earl Hall, Lelund Weatherspoon, and Pat Downey. We also spoke with former Iowa State wrestler, 2015 NCAA champion, and Olympic hopeful Kyven Gadson. We spoke with them at the Cyclone Wrestling Club social, held right after the conclusion of the 2016 NCAA Div. I Wrestling Championships in Madison Square Garden in New York.

Earl Hall finished his Iowa State college wrestling career by finishing seventh at 133 pounds to win his second All-American honors. Lelund Weatherspoon, a redshirt junior who was unseeded in this tournament, finished sixth at 174 pounds to win his first All-American honors. Pat Downey, a sophomore in his first season with Iowa State and who was also unseeded, finished fifth at 197 pounds.

As a team, Iowa State finished in 12th place, after being ranked 17th before the tournament.

We discussed with these All-American wrestlers how their tournament went, their backgrounds, and their future plans.

Kyven Gadson discussed how Iowa State performed at the NCAAs, his upcoming competition at the 2016 Olympic Trials, and what he wants to see changed in wrestling.

In addition, we open with a commentary on the rarely-discussed issue of diversity in college wrestling.