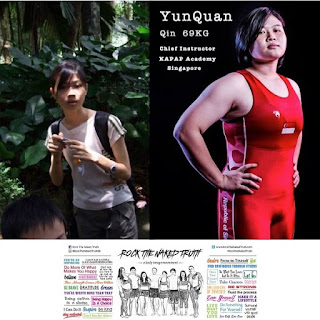 On this edition of No Holds Barred, host Eddie Goldman once again spoke with martial artist and catch wrestler Qin Yunquan.

She is an instructor for women's and children's self-defense at the Kapap Academy Singapore.

She has also just been invited to join the new Singapore-based body image movement, Rock The Naked Truth.

We spoke with her by Skype Thursday (Wednesday New York time).

Before she was involved in martial arts and combat sports, at the age of 17 she suffered from anorexia, and weighed just 37 kg (about 81 pounds). Now an active freestyle and catch wrestler as well as a self-defense instructor, we discussed her transformation and involvement with Rock the Naked Truth.

"I was invited to the Rock the Naked Truth movement," she said.

She continued, "Don't be subjected to people's scrutiny. I think that's the objective of Rock the Naked Truth."

We discussed how this movement helps both men and women to get in shape, to be happy about it, and to combat low self-esteem.

Qin Yunquan's journey is also a story with many lessons for all. She went from being, in her words, a "chubby" teenager, to becoming anorexic, to straightening herself out and finding a calling in martial arts and teaching women's self-defense. She also has wrestled as part of the Singapore national wrestling team. We discussed how her academy values every martial arts system, including the Kapap unarmed combat system, Brazilian Jiu-Jitsu, catch wrestling, and many more.

In addition, we discussed the upcoming March 20 catch wrestling tournament in Singapore, the grappling scene there, and much more.

From December 2007: 'It's Time for Federal and State Investigations of UFC Contracts' 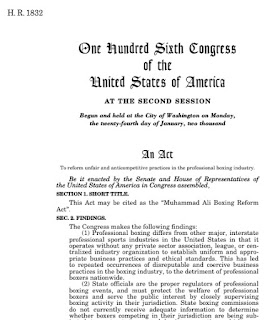 Note: The link to a December 2007 article I wrote, 'It's Time for Federal and State Investigations of UFC Contracts,' no longer works, but it is still available on the Internet Archive. Here it is reposted, with the new link:

It's Time for Federal and State Investigations of UFC Contracts
Submitted by:E.Goldman / Sr. Editor
Posted on : 12/27/2007

The battle between mixed martial arts fighters and the promotional company Zuffa, the parent company of the UFC, is heating up, and very publicly.

Fedor Emelianenko, considered by most observers to be both the top heavyweight and pound-for-pound mixed martial arts fighter in the world, recently gave an interview to Sherdog.com in which he explained his reasons for not signing a contract to fight in UFC. He is quoted as saying:

"The contract that we were presented with by the UFC was simply impossible, couldn't be signed -- I couldn't leave. If I won, I had to fight eight times in two years. If I lost one fight, then the UFC had the right to rip up the contract. At the conclusion of the contract, if I am undefeated, then it automatically extends for an as yet unspecified period of time, though for the same compensation.

"Basically I can't leave undefeated. I can't give interviews, appear in films or advertising. I don't have the right to do anything without the UFC's agreement. I could do nothing without the OK from the UFC. I didn't have the right to compete in combat sambo competition. It's my national sport. It's the Russian sport, which in his time our president competed in, and I no longer have the right to do so. There were many such clauses; the contract was 18 pages in length. It was written in such a way that I had absolutely no rights while the UFC could at any moment, if something didn't suit them, tear up the agreement. We worked with lawyers who told us that it was patently impossible to sign such a document." (http://www.sherdog.com/news/articles.asp?n_id=10538)

Thursday's Los Angeles Times has an article reviewing the growing number of disputes between top UFC fighters and the Zuffa management. UFC president Dana White, commenting about the dispute which led now-former UFC heavyweight champion Randy Couture to announce his resignation from that company, is quoted as saying, "You don't resign from a contract. It's a four-fight deal, and we're going to aggressively protect our rights." (http://www.latimes.com/sports/la-sp-ufc27dec27,1,3824043,full.story)

We now have both a top fighter and the UFC president going on the public record stating that UFC fighters are essentially required to sign contracts from which they "couldn't leave" or can't or "don't resign."

Since being accepted as a legitimate sport by most state athletic commissions in the U.S., and with most promotional companies more or less complying with the regulations of these commissions, the business side of the mixed martial arts has largely escaped the scrutiny of government officials. While much needed attention by some of these commissions has been given to the ongoing doping scandals in MMA, and even though much more needs to be done to deal with that particular plague, almost nothing has been done to guarantee the rights of the fighters in the contractual process.

Now numerous major figures in MMA have come out in favor of the formation of a fighters' union, including both Randy Couture and the now-retired legendary referee Big John McCarthy (as he recently did on my show, No Holds Barred).

The time has come for both federal and state agencies in the U.S. to examine the legality of these UFC contracts. Even if they are technically legal, they also must be compared to the federal requirements for boxing contracts mandated by the Muhammad Ali Boxing Reform Act, which was enacted in 2000.

While that act only regulates boxing, one of the selling points most MMA promoters have made for their sport to be legalized and regulated by the state commissions was that they were more than willing to comply with all the rules and regulations which boxing promoters were required to follow.

The Ali Act reads, “Open competition in the professional boxing industry has been significantly interfered with by restrictive and anti-competitive business practices of certain promoters and sanctioning bodies, to the detriment of the athletes and the ticket-buying public. Common practices of promoters and sanctioning organizations represent restraints of interstate trade in the United States.” (http://www.govtrack.us/congress/billtext.xpd?bill=h106-1832)

In MMA, the situation is actually worse than boxing, as there are as yet no independent sanctioning bodies, and promotional companies like Zuffa do their own matchmaking, designation of champions and challengers, etc.

Of course, the state commissions have been disgracefully lax in enforcing the Ali Act, and efforts to create a national boxing commission of some sort to do so have not been successful.

For MMA, perhaps an appropriate time to examine these contracts will be the expected attempt in 2008 in New York to override a 1997 state law which outlawed “combative sports” such as NHB/MMA.

The issue of the relative safety of MMA has long been resolved by the public record of this sport in regulated events. Now the time has come for the political focus to be shifted onto the “restrictive and anti-competitive business practices of certain promoters” in MMA.

The alternative is to let the structure of MMA congeal into one far worse for the fighters than even boxing is.