No Holds Barred: King Mo on Rizin, Bellator, and Boxing 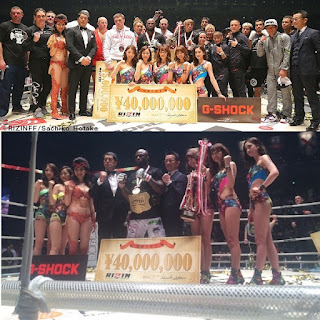 King Mo is fresh off a major victory, having won the 2015 Rizin FF World Grand-Prix heavyweight tournament. To do so, he had to win three fights. On December 29, 2015, in the opening round of this eight-man tournament, he scored a knockout over British fighter Brett McDermott. Just two days later, on December 31, he won two more fights. In the semifinals, he defeated Teodoras Aukstuolis of Lithuania by unanimous decision. In the finals, he scored a knockout over Jiri Prochazka of the Czech Republic at 5:09 of the first round to win the tournament. This inaugural Rizin event was held at the Saitama Super Arena in Saitama, Japan.

We spoke with King Mo by phone Tuesday.

His approach to this tournament, he said, was "to go out there and try to take no damage, have good defense, and get my takedowns" when he wanted.

On the advice of former UFC heavyweight and Pride Grand Prix champion Mark Coleman, who also was an NCAA Div. I wrestling champion and 1992 U.S. Olympic freestyle wrestler, he was able, under Rizin's rules, to fight while wearing wrestling shoes. King Mo said Mark Coleman told him, "You're a wrestler. I wore wrestling shoes when I won it. You wear wrestling shoes and you'll win it."

We discussed each of his three victories in the Rizin tournament, as well as the Rizin rules, their use of a ring rather than a cage, and fighting three fights over three days.

In addition, we discussed how his plans for fighting in 2016 in Bellator and/or Rizin have yet to be determined; the wide-open heavyweight division in boxing with the Wilder-Szpilka and Glazkov-Martin fights coming up January 16 as well as the ascension of Anthony Joshua; his use of social media; and much, much more.