No Holds Barred: Eddie Goldman and Bob Carson on the Legacy of Manny Yarbrough 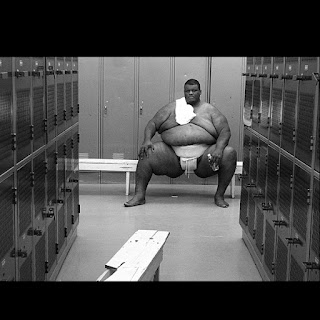 (Photo of Manny Yarbrough courtesy of Beatrice Davis of Sassy B Worldwide Productions.)

On this edition of No Holds Barred, host Eddie Goldman once again spoke with Bob Carson, the host of Carson's Corner.

Our topic was the life and legacy of the sumo wrestler and martial artist Manny Yarbrough, who passed away at age 51 a few days ago.

A GoFundMe page has been set up to raise funds to transport his body from Virginia, where he lived, to New Jersey, where his mother lives, and to assist his family. The page is here.

We spoke with Bob Carson by Skype Wednesday.

Much of what has been written about Manny Yarbrough has come from people who didn't know him or, worse, care about him, and included numerous factual inaccuracies. The people who did know him know that he was not only a giant of a man in stature and size, standing six-foot, eight-inches tall and often weighing over 600 pounds, but he was also a giant of a person, multi-talented, caring, thoughtful.

We discussed how he was a product of the historically Black college Morgan State in Baltimore, where he played football and wrestled, becoming an All-American in both sports, and how his size and talent led him to a career as an athlete. But it also prevented him from being accepted as an athlete and not just a huge guy, and had him kicked out of wrestling because weight limits were put into international and college wrestling during his career.

Manny became an amateur sumo world champion in 1995, but outside of the closely-guarded and often controversial pro sumo in Japan, no one was able to create a successful pro sumo circuit anywhere else, and he was thus unable to capitalize much on his talent in that sport. He fought a few times in MMA, including his famous or infamous loss in 1994 in UFC 3 to Keith Hackney. He got some small parts as an actor, where he showed his talents, but was there mainly because of his size and appearance, and was again stereotyped as just a huge Black guy.

Yet when news of his passing spread online, there was an outpouring of love, grief, and sympathy from many different types of people whom he had touched, including many who had known him at different stages of his life and didn't know each other.

"We can all become better people, I think, by really looking at Manny and how he acted and how he really conducted himself."

We also discussed much more about Manny's athletic career, how he seemed never to get his due from the sports organizations with which he worked, the issues related to what has been cited as his "food addiction", why it is another disgrace on our social system that funds have to be raised for such a talented athlete and individual as he was, how the lessons of his life must include the necessity for athletes to organize for the mutual aid and benefit of themselves and other athletes, and much more.