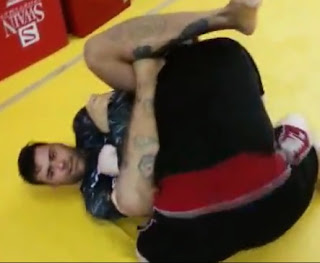 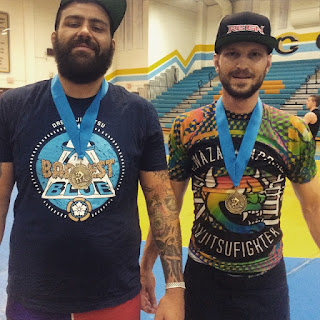 On this edition of No Holds Barred, host Eddie Goldman spoke with grappler and martial artist Travis Newaza.

Besides competing in numerous tournaments in Brazilian Jiu-Jitsu and grappling, he has also been training in catch wrestling and many styles of combat sports with Josh Barnett and Erik Paulson.

On January 11, 2015, he was victorious in the absolute and heavyweight divisions of the West Coast King of Catch Wrestling Tournament held in San Diego, California, and won the Outstanding Competitor Award, winning all his matches by submissions.

A serious neck injury, however, has recently sidelined him from competition. He is currently on a national seminar tour, in part aimed at raising funds to help pay for an expensive corrective procedure.

We spoke with Travis Newaza by phone Sunday.

He had just completed a seminar at Sambo Steve Koepfer's New York Combat Sambo, and was himself very impressed.

"It was such an honor to, one, be able to be invited to Sambo Steve's academy," he said. "I'm a big fan of what Sambo Steve has done for the sport of sambo."

And he added, "And two, man, is he just a wealth to be drawn from, so many different styles of grappling that we're not really used to seeing."

He will be continuing his seminar tour across the U.S., with upcoming dates in Florida, Kansas City, Missouri, Los Angeles, and other cities.

The seminars, like his own competitions, do not focus on one style or discipline.

"I've never really been worried about rulesets," he said. "You should be able to adapt."

And that applies to everythng in grappling.

"It's all wrestling. It's all grappling."

We discussed what got him to start training so seriously in these styles of grappling three years ago, his hopes of bringing grappling training to non-profit youth organizations, his Newaza Apparel company, and much, much more.