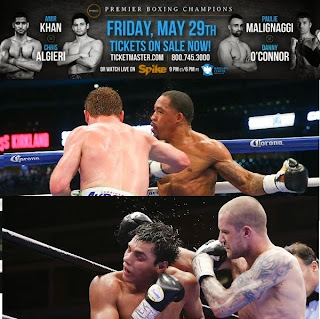 On this edition of No Holds Barred, host Eddie Goldman previews the Friday, May 29, Premier Boxing Champions card at the Barclays Center in Brooklyn, New York, by speaking with Amir Khan, Chris Algieri, and Paulie Malignaggi.

We spoke with Amir Khan, Chris Algieri, and Paulie Malignaggi on a media conference call Wednesday.

This past weekend there were several televised fights, and we review Saturday's action on the PBC on CBS card and the HBO card later that evening.

On the PBC on CBS card, which took place at the State Farm Arena in Hidalgo, Texas, Omar Figueroa of Texas (25-0-1, 18 KOs) got a close and controversial unanimous decision over Ricky Burns of Scotland (37-5-1, 11 KOs), in a super lightweight fight. Also on that show, the U.K.'s Jamie McDonnell (25-2-1, 12 KOs) defended his WBA bantamweight belt by winning a unanimous decision over previously unbeaten Tomoki Kameda (31-1, 19 KOs), who is from Japan but trains in Mexico.

On the HBO card, which took place at Minute Maid Park in Houston, Texas, and as many expected, super welterweight Saul "Canelo" Alvarez (45-1-1, 32 KOs) knocked out James Kirkland of Texas (32-2, 28 KOs) in the third round of a slugfest.

We compare the PBC on CBS card to the Canelo-Kirkland fight on HBO, discuss more of the fallout over Pacquiao's claim he was injured during his fight with Floyd Mayweather, rip the mainstream and most of the boxing media for not properly discussing this issue and dealing with doping in boxing, and much more.