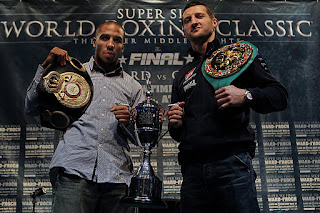 On this edition of No Holds Barred, host Eddie Goldman speaks with Super Six World Boxing Classic finalists Andre Ward and Carl Froch, and discusses why the bad governance in boxing made this super middleweight tournament necessary.

We spoke with both Andre Ward and Carl Froch at the kickoff news conference in August for this fight, which had originally been scheduled for October 29 but had to be postponed after Ward suffered a cut during training. We discussed what to expect in this fight, as well as the need for a boxers' union. We also previewed this fight with New York TV host Kristal Hart, whose show airs on Manhattan Neighborhood Network.

In addition, we open with a commentary on why it took an American television network, Showtime, to organize a tournament of the top fighters in the world in this division, when legitimate sports regularly have competitions pitting the best against the best.