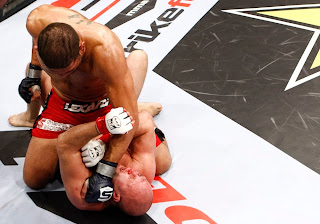 Photo: Esther Lin/Strikeforce
On this edition of No Holds Barred, host Eddie Goldman discusses the historic victory by Antonio "Bigfoot" Silva over Fedor Emelianenko in their opening round fight of the Strikeforce World Grand Prix Heavyweight Tournament, which took place Saturday, February 12, at the Izod Center in East Rutherford, New Jersey. After a dominating second round by Bigfoot, the fight was stopped by the ringside physician due to damage to the right eye of Fedor.
After the fight, we got some comments from the victor, Antonio "Bigfoot" Silva. We also have the part of the postfight news conference where Vadim Finkelchtein and Evgeni Kogan of M-1 Global along with Scott Coker of Strikeforce discuss the loss by Fedor and his future. And we have Antonio "Bigfoot" Silva speaking and answering questions at this news conference as well.
Also, we open with a no holds barred commentary on some of the key lessons of this fight and what they mean for mixed martial arts and the combat sports. We discuss the continuing importance to MMA of Brazilian Jiu-Jitsu, the unparalleled greatness of the MMA career of Fedor Emelianenko, the effect of Bigfoot's upset of Fedor on the sport of MMA and this heavyweight tournament, important blunders that were made in organizing the event in New Jersey, and much more.
You can play or download No Holds Barred here. You can also download No Holds Barred here. If one link does not work, please try another. The show is in MP3 format, so may take some time to download.
Also, No Holds Barred is available through iTunes.
The No Holds Barred theme song is called "The Heist", by Ian Carpenter.
No Holds Barred is free to listen to and is sponsored by:
Beezid.com - Penny Auctions. Your #1 source for exciting auction shopping and outstanding deals on just about anything! Top rated, most trusted auction site online. Where do you shop? Beezid.com - Penny Auctions.
American Top Team. Whether you're a beginner or a champion, train with the champions in Brazilian Jiu-Jitsu, boxing, wrestling, grappling, and mixed martial arts at American Top Team. Check out their web site at http://americantopteam.com/.
The American Sambo Association, which is committed to becoming the premier association in the U.S. dedicated to the advancement of Sambo. Sambo is a form of sport, self-defense, and combat established in the former Soviet Union during the early twentieth century. For more information, go to ussambo.com.
BJJMart.com, your premier source for all Brazilian Jiu-Jitsu gear, videos, books, and much more.