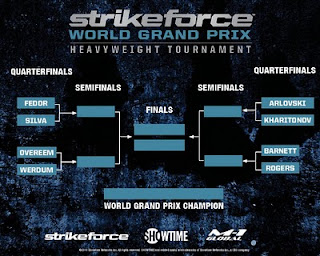 On this edition of No Holds Barred, host Eddie Goldman speaks with Donovan Craig, the editor-in-chief of Fight! Magazine.

Our main discussion focused upon the upcoming Strikeforce World Grand Prix Heavyweight Tournament, which begins February 12 at the IZOD Center in East Rutherford, New Jersey, and will be shown live in the U.S. on Showtime.

Besides discussing the brackets, the historical importance of this tournament, and how we see it going, we delved into numerous other topics. Among those we talked about were the cultural and political reasons why MMA is still not legal in New York, the role of movies and fiction in combat sports, the significance of and lessons from the Ali-Frazier trilogy and rivalry for MMA, the Jacob Volkmann-Obama situation, the omission of MMA by a recent Harris Poll on their survey about favorite sports, the actual position of M-1 Global on drug-testing and this tournament, and much more.

In addition, an online petition has just been started for Strikeforce to get the legendary Lenne Hardt as a ring announcer for this tournament. You can sign it here.