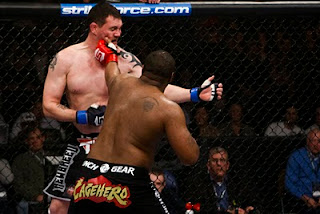 On Friday, January 7, at the Strikeforce Challengers mixed martial arts card in Nashville, Tennessee, and shown live in the U.S. on Showtime, he notched his seventh consecutive victory with a dominating unanimous decision over Devin Cole.

We spoke with Daniel Cormier by phone on Sunday about his latest victory and his plans in mixed martial arts. We discussed the technique he used in this fight, including his improved striking. Topics included how he has advanced as a fighter since his pro debut in September 2009, the possibility of him competing as an alternate in the upcoming Strikeforce Heavyweight Grand Prix, whether or not he will stay at heavyweight, his training at American Kickboxing Academy with fighters such as former wrestler and current UFC heavyweight champion Cain Velasquez, the difficulties of trying to compete in wrestling and mixed martial arts at the same time, the greatness of the NCAA Div. I Wrestling Championships, and much more.