No Holds Barred: Shields-Marshall and Mayer-Baumgardner Preview, on The WAAR Room with Chris Baldwin and Malissa Smith 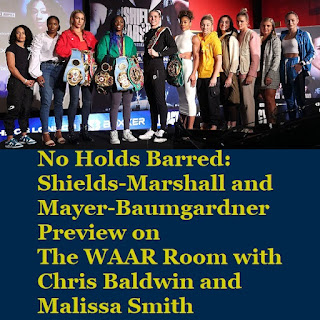 On this edition of No Holds Barred, host Eddie Goldman once again spoke with our colleagues Chris Baldwin of the WAAR Room and Malissa Smith of Girlboxing on the WAAR Room. A video of this discussion has also been posted on the WAAR Sports YouTube page.
We spoke with them by Zoom Tuesday, October 11.
This Saturday, October 15, history will be made at London's O2 Arena when an all-women's boxing card, headlined by two major title unification fights, takes place. The main event will see two unbeaten fighters, WBC-WBA-IBF-Ring Magazine middleweight champ Claressa Shields and WBO champ Savannah Marshall, fight to crown an undisputed champion. The co-feature will have WBO-IBF-Ring Magazine champ Mikaela Mayer face WBC champ Alycia Baumgardner in a junior lightweight title unification fight. This card will be shown on Sky Sports in the U.K. and ESPN+ in the U.S.
We discussed this card including the two headline title fights. We also discussed the latest developments in Olympic boxing, as the IBA continues to defy the IOC and most sports bodies by allowing fighters from Russia and Belarus to compete under their own flags.
(Photo of fighters on Shields-Marshall full card from Mikey Williams/Top Rank via Getty Images.)
Please also subscribe to the No Holds Barred page on Patreon for much more exclusive premium No Holds Barred content.
You can play or download No Holds Barred on Anchor, Patreon, and the Internet Archive. If one link does not work, please try another.
The No Holds Barred theme song is called "The Heist", which is also available on iTunes by composer Ian Snow.