No Holds Barred: The Olympic Boxing Debacle, on The WAAR Room with Chris Baldwin and Malissa Smith 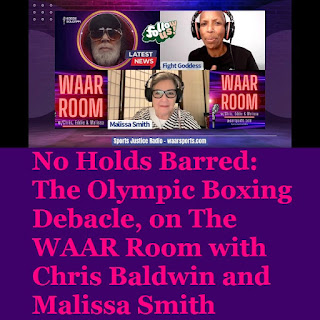 On this edition of No Holds Barred, host Eddie Goldman once again spoke with our colleagues Chris Baldwin of the WAAR Room and Malissa Smith of Girlboxing on the WAAR Room. A video of this discussion has also been posted on the WAAR Sports YouTube page.
We spoke with them by Zoom Monday, October 3.
We had an in-depth discussion of the "extraordinary congress" of the IBA, which was held September 25 in Armenia. This congress was a complete debacle and only set the stage for IBA's suspension from the IOC being turned into expulsion, and boxing being completely dropped from the Olympic program starting in 2028.
Since we recorded this show, there has been another development which will likely only hasten Olympic boxing's demise. Going against the recommendations of the IOC and what virtually every other international Olympic federation has done following Russia's war of aggression against Ukraine, IBA will now allow boxers from Russia and Belarus to compete under their own national flags and identities, playing their national anthems for tournament winners. We also discussed the implications of this for both professional and amateur boxing.
Please also subscribe to the No Holds Barred page on Patreon for much more exclusive premium No Holds Barred content.
You can play or download No Holds Barred on Anchor, Patreon, and the Internet Archive. If one link does not work, please try another.
The No Holds Barred theme song is called "The Heist", which is also available on iTunes by composer Ian Snow.