No Holds Barred: All Women's Boxing Card October 15, Olympic Boxing Near Death, on The WAAR Room with Chris Baldwin and Malissa Smith 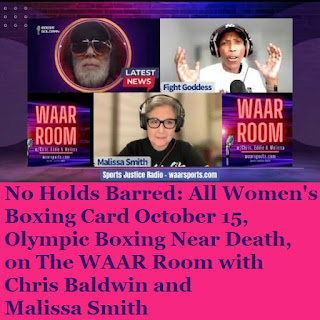 On this edition of No Holds Barred, host Eddie Goldman once again spoke with our colleagues Chris Baldwin of the WAAR Room and Malissa Smith of Girlboxing on the WAAR Room. A video of this discussion has also been posted on the WAAR Sports YouTube page.
We spoke with them by Zoom Tuesday, September 20.
On October 15, an historic all-women's boxing card will take place at the O2 Arena in London. It is headlined by the Claressa Shields-Savannah Marshall undisputed middleweight title fight and the Mikaela Mayer-Alycia Baumgardner junior lightweight unification title bout. This will be shown on Sky Sports in the U.K. and ESPN+ in the U.S. We discussed this card as well as what else is going on in women's boxing.
On September 25, the beleaguered IBA will have their second presidential election this year. The IBA has been stripped of the right to organize the boxing at the 2024 Paris Olympics, while boxing has been excluded from the initial program for the 2028 Los Angeles Olympics. We discussed the growing influence of Russia in IBA, how this is contributing to the death of Olympic boxing, and more.
Please also subscribe to the No Holds Barred page on Patreon for much more exclusive premium No Holds Barred content.
You can play or download No Holds Barred on Anchor, Patreon, and the Internet Archive. If one link does not work, please try another.
The No Holds Barred theme song is called "The Heist", which is also available on iTunes by composer Ian Snow.
# posted by Eddie Goldman : 5:23 PM