No Holds Barred: Is Olympic Boxing Doomed? on The WAAR Room with Chris Baldwin and Malissa Smith 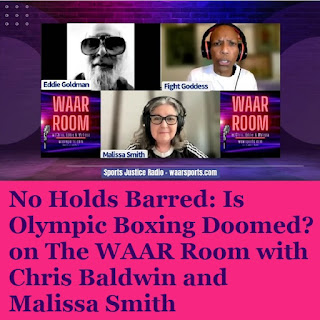 On this edition of No Holds Barred, host Eddie Goldman once again spoke with our colleagues Chris Baldwin of the WAAR Room and Malissa Smith of Girlboxing on the WAAR Room. A video of this discussion has also been posted on the WAAR Sports YouTube page.
We spoke with them by Zoom Friday, August 12.
Allegations of corruption continue to be made against the International Boxing Association (IBA), which is still under suspension by the International Olympic Committee. IBA will not be allowed to organize the boxing at the 2024 Paris Olympics, which will be done by the IOC themselves, and boxing remains excluded entirely from the program of the 2028 Los Angeles Olympics.
Rising in opposition to the current IBA leadership is the Common Cause Alliance. On July 25, they sent an open, public letter to the IBA board explaining why the upcoming IBA congress in September should not be held in Armenia. The main reasons were major problems, including security, at the EUBC Elite Men’s Championships held in May in Armenia, and Armenia's political and military ties to Putin's Russia during Russia's war of aggression against Ukraine. The letter was signed by leaders of 15 national boxing federations, including some of the most successful countries in Olympic boxing: the U.S., the Philippines, Finland, Australia, Iceland, Czechia, Switzerland, New Zealand, France, Canada, Denmark, England, Sweden, Ireland, and the Netherlands.
We discussed the ongoing crisis in Olympic boxing and how this affects both professional and amateur boxing. We also discussed some of the latest boxing news, including updates on the Oleksandr Usyk-Anthony Joshua rematch August 20 in Jeddah, Saudi Arabia, and the Claressa Shields-Savannah Marshall fight September 10 in London, and much more.
Please also subscribe to the No Holds Barred page on Patreon for much more exclusive premium No Holds Barred content.
You can play or download No Holds Barred on Anchor, Patreon, and the Internet Archive. If one link does not work, please try another.
The No Holds Barred theme song is called "The Heist", which is also available on iTunes by composer Ian Snow.