No Holds Barred: IOC Tells IBA Enough Is Enough, on The WAAR Room with Chris Baldwin and Malissa Smith 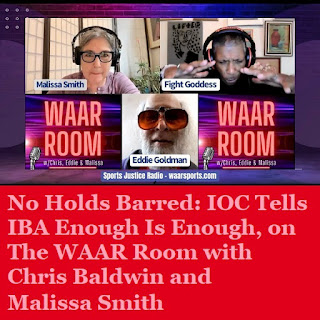 On this edition of No Holds Barred, host Eddie Goldman once again spoke with our colleagues Chris Baldwin of the WAAR Room and Malissa Smith of Girlboxing on the WAAR Room. A video of this discussion has also been posted on the WAAR Sports YouTube page.
We spoke with them by Zoom Monday, June 27.
The scandal-drenched International Boxing Association (IBA) made headlines again last week, and not for anything positive. At their Executive Board meeting, the International Olympic Committee (IOC) not only confirmed that their suspension of IBA stands, but also that IBA would not be allowed to organize the boxing competition and qualification events for the 2024 Paris Olympics. They cited numerous failures of IBA, especially in the area of governance.
The Court of Arbitration for Sport (CAS) had ruled that, in their recent presidential election, IBA's exclusion of Dutch Boxing Federation President Boris van der Vorst, who was running against incumbent IBA President Umar Kremlev of Russia, was unwarranted, as well as the exclusion of four reformers who were running for the IBA's Board of Directors. So far, IBA claims that they will consider holding a new presidential election in a few months, but has said nothing about holding a new election for their Board of Directors.
The IOC has also raised the issue about IBA's failure to properly prepare for the 2024 Olympic qualifying events including no host city contracts being signed, the lack of a sufficient number of qualified referees and judges, and IBA's continued financial dependence on the Russian state-controlled Gazprom energy giant.
"Enough was enough," said IOC Sports Director Kit McConnell at the press conference. Thus, for the second Olympics in a row, IBA has been stripped of the right to organize the boxing competition, with the IOC set to devise a plan to do so themselves.
Boxing also remains excluded from the program for the 2028 Los Angeles Olympics, with the possibility that boxing will no longer be an Olympic sport looking likelier as time goes on.
Also, Malissa Smith discussed the latest women's boxing news, including Jessica McCaskill's successful defense of her undisputed welterweight ttile, and Christy Martin's new book.
Please also subscribe to the No Holds Barred page on Patreon for much more exclusive premium No Holds Barred content.
You can play or download No Holds Barred on Anchor, Patreon, and the Internet Archive. If one link does not work, please try another.
The No Holds Barred theme song is called "The Heist", which is also available on iTunes by composer Ian Snow.