No Holds Barred: Christy Martin on The WAAR Room with Chris Baldwin and Malissa Smith 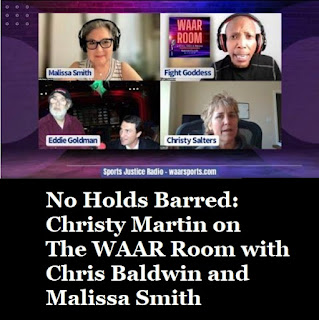 On this edition of No Holds Barred, host Eddie Goldman once again spoke with our colleagues Chris Baldwin of the WAAR Room and Malissa Smith of Girlboxing on the WAAR Room. A video of this discussion has also been posted on the WAAR Sports YouTube page.
We spoke with them by Zoom Thursday, July 7.
Boxing legend and International Boxing Hall of Fame inductee Christy Martin joined us as a guest to discuss her newly published autobiography "Fighting For Survival: My Journey Through Boxing Fame, Abuse, Murder, and Resurrection". Her incredible story was also produced as a documentary titled "Untold: Deal with the Devil" on Netflix.
Christy shared with us the important work her foundation is doing to raise awareness about domestic violence and mental abuse. Christy's Champs provides a network and resources to support those who have suffered emotional and physical abuse at the hands of an intimate partner or family member.
We also discussed her own boxing career, her coming out as a lesbian and how the boxing world treats LGBTQ people, the development of women's boxing, her current work as a boxing promoter, her dealings with Don King, and much more.
Please also subscribe to the No Holds Barred page on Patreon for much more exclusive premium No Holds Barred content.
You can play or download No Holds Barred on Anchor, Patreon, and the Internet Archive. If one link does not work, please try another.
The No Holds Barred theme song is called "The Heist", which is also available on iTunes by composer Ian Snow.