No Holds Barred: Usyk-Joshua 2, Sportswashing, and the Growth of Saudi Boxing, on The WAAR Room with Chris Baldwin and Malissa Smith 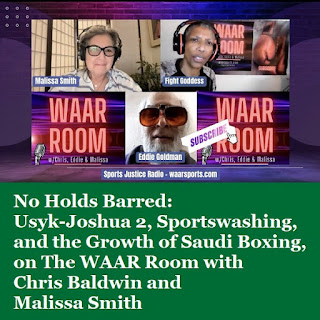 On this edition of No Holds Barred, host Eddie Goldman once again spoke with our colleagues Chris Baldwin of the WAAR Room and Malissa Smith of Girlboxing on the WAAR Room. A video of this discussion has also been posted on the WAAR Sports YouTube page.
We spoke with them by Zoom Tuesday, June 21.
The kickoff press conference for the rematch between WBA-IBF-WBO heavyweight champ Oleksandr Usyk and the fighter he defeated to win those belts last September, Anthony Joshua, took place Tuesday, June 21, in Jeddah, Saudi Arabia. That fight is scheduled to take place there August 20
Locating this fight in the Kingdom of Saudi Arabia, a monarchy and theocracy with a well-known abysmal human right record, has prompted many to accuse the Saudis of "sportswashing", a term which means "attempting to detract attention from the country's human rights record".
Amnesty International UK had requested that Anthony Joshua speak out against these human rights violations. But asked about this after the press conference, Joshua brushed off these concerns and told reporters, "I don't know what that is. I'm here to win the heavyweight champion of the world. I like Saudi. I think Saudi's good. I'm having a good time here. I'm treated really well. All that allegation stuff, for me, I'm not caught up in any of that stuff. I'm here to have a good time, mix with the local people, bring entertainment to Saudi."
Yet to understand why the Saudis are reportedly paying tens of millions of dollars to host this fight, and have attracted many other high profile sporting events, it should be understood that their motivation is not only to detract attention from their human rights record. Saudi Arabia is using their hundreds of billions of petrodollars accumulated over many decades to try to diversify the economy, reduce their financial dependance on petroleum revenue, and further develop their sports, entertainment, and tourism sectors.
Saudi Arabia's modernization plans also include the enhancing of sports training, facilities, and competition for Saudi youth. In particular, they have been developing a growing amateur boxing program for both young men and women, and are actively engaged in the international Olympic boxing movement. Bringing major fights like this one to their country is in part aimed at encouraging more youth to participate and train in boxing.
We discussed all sides of this, how most of the Western media has a one-sided view of the social and economic significance of this fight taking place in Saudi Arabia, and much more.
Please also subscribe to the No Holds Barred page on Patreon for much more exclusive premium No Holds Barred content. You can play or download No Holds Barred on Anchor, Patreon, and the Internet Archive. If one link does not work, please try another.
The No Holds Barred theme song is called "The Heist", which is also available on iTunes by composer Ian Snow.