No Holds Barred: Kali Reis on The WAAR Room with Chris Baldwin and Malissa Smith 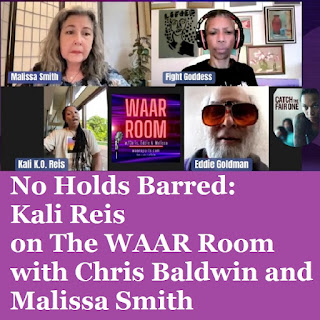 On this edition of No Holds Barred, host Eddie Goldman once again spoke with our colleagues Chris Baldwin of the WAAR Room and Malissa Smith of Girlboxing on the WAAR Room. A video of this discussion has also been posted on the WAAR Sports YouTube page.
Our guest was boxer, actor, and activist Kali Reis, who holds the WBA and WBO 140-pound belts.
We spoke with them by Zoom Monday, June 6.
Besides discussing her boxing career, we discussed her film "Catch the Fair One", for which she was nominated for the prestigious International Spirit Award for best actor. In it she portrayed a Native American boxer who risked her own life to enter the world of sex trafficking to find her missing sister.
Every year, thousands of Native Americans go missing or are murdered. To this date, there is still no database keeping track of these statistics.
The film was co-written by Kali Reis and Josef Wladyka and stars Kali and former women's pro boxer Shelley Vincent.
See this movie on Amazon Prime. Support independent film.
Please also subscribe to the No Holds Barred page on Patreon for much more exclusive premium No Holds Barred content. You can play or download No Holds Barred on Anchor, Patreon, and the Internet Archive. If one link does not work, please try another.
The No Holds Barred theme song is called "The Heist", which is also available on iTunes by composer Ian Snow.