No Holds Barred: Taylor and Serrano Make History, and Kinahan Cornered, on The WAAR Room with Chris Baldwin and Malissa Smith 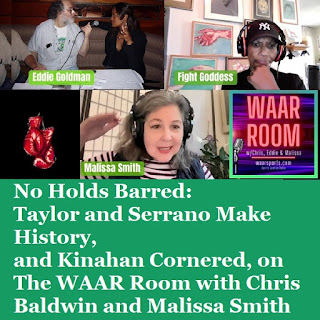 On this edition of No Holds Barred, host Eddie Goldman once again spoke with our colleagues Chris Baldwin of the WAAR Room and Malissa Smith of Girlboxing on the WAAR Room. A video of this discussion has also been posted on the WAAR Sports YouTube page.
We spoke with them by Zoom Monday, May 2.
What a fight! The bout between Ireland's undisputed lightweight champion fighter, Katie Taylor, and Amanda Serrano, the Brooklyn-based seven-division champion who hails from Puerto Rico, was one for the ages. Taylor and Serrano made history as the first women headliners in the main arena at the mecca of boxing, Madison Square Garden. Fighting on a packed card, the two pound-for-pound greats fought an instant classic in front of a sold-out crowd of excited fans with a decibel level that was so loud, the referee couldn't hear the bell at the end of a few of the rounds. Taylor came out on top with a split-decision and a lot of talk of a rematch. Time will tell.
The second half of the show looked at the impact of the U.S. government's decision to freeze the assets of the top echelon of the Kinahan Organized Crime Group, along with putting a five million dollar bounty leading to the arrest and conviction of the gang's leadership. We discussed the impact of this decision on boxing, including the shuttering of MTK Global's boxing empire. Bob Arum of Top Rank promised to cooperate with U.S. authorities but did admit he'd paid Daniel Kinahan four million dollars in fees for the Tyson Fury fights. The WBC also had to walk back their very recent public embrace of Daniel Kinahan. A lot of uncertainty remains on what the fallout will be. We shall continue to discuss it on future WAAR Room shows as more information becomes available.
Please also subscribe to the No Holds Barred page on Patreon for much more exclusive premium No Holds Barred content.
You can play or download No Holds Barred on Anchor, Patreon, and the Internet Archive. If one link does not work, please try another.
The No Holds Barred theme song is called "The Heist", which is also available on iTunes by composer Ian Snow.