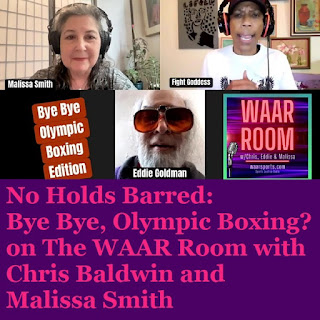 On this edition of No Holds Barred, host Eddie Goldman once again spoke with our colleagues Chris Baldwin of the WAAR Room and Malissa Smith of Girlboxing on the WAAR Room. A video of this discussion has also been posted on the WAAR Sports YouTube page.
We spoke with them by Zoom Monday, May 23.
The beleaguered International Boxing Association (IBA), at their recent congress, only allowed sitting president Umar Kremlev of Russia to run for that office after disqualifying his only opponent a day before the election, and also disqualified four candidates from running for their board who had raised some criticisms of the direction IBA has taken. This stunt did not sit well with the IOC, which had already suspended IBA, and said it was closely monitoring what was supposed to be a governance reform process for IBA.
At the same time, relations between the IOC and Putin's Russia have been at a low point since Russia began its war of aggression against Ukraine right after the conclusion of the Tokyo Olympics, which was supposed to be a period of peace called the Olympic Truce. For years the IOC has appeased Russia, following their violation twice before of the Olympic Truce, with the attack on Georgia in 2008 and annexation of Crimea in 2014, and their recalcitrant and defiant actions involving their state-sponsored doping program. All these resulted essentially in slaps on the wrist. But IOC president Bach last week said that Russia was responsible for "personal threats to individuals from the IOC and Olympic Movement." Only this might have been the breaking point for Bach.
We discussed why it is not surprising that a Mafia regime like Putin's tried to threaten and bully the IOC, how IBA's reliance on Russia for funding through the state-run Gazprom energy giant may have doomed their chances of being reinstated by the IOC, how all this further jeopardizes Olympic boxing which already has been excluded from the program of the 2028 Los Angeles Olympics, how the demise of Olympic boxing will damage and possibly destroy both amateur and professional boxing, who might potentially replace Russia as a benefactor of Olympic boxing, and much more.
In addition, Malissa Smith kept us up-to-date with some important news about women's boxing.
Please also subscribe to the No Holds Barred page on Patreon for much more exclusive premium No Holds Barred content.
You can play or download No Holds Barred on Anchor, Patreon, and the Internet Archive. If one link does not work, please try another.
The No Holds Barred theme song is called "The Heist", which is also available on iTunes by composer Ian Snow.